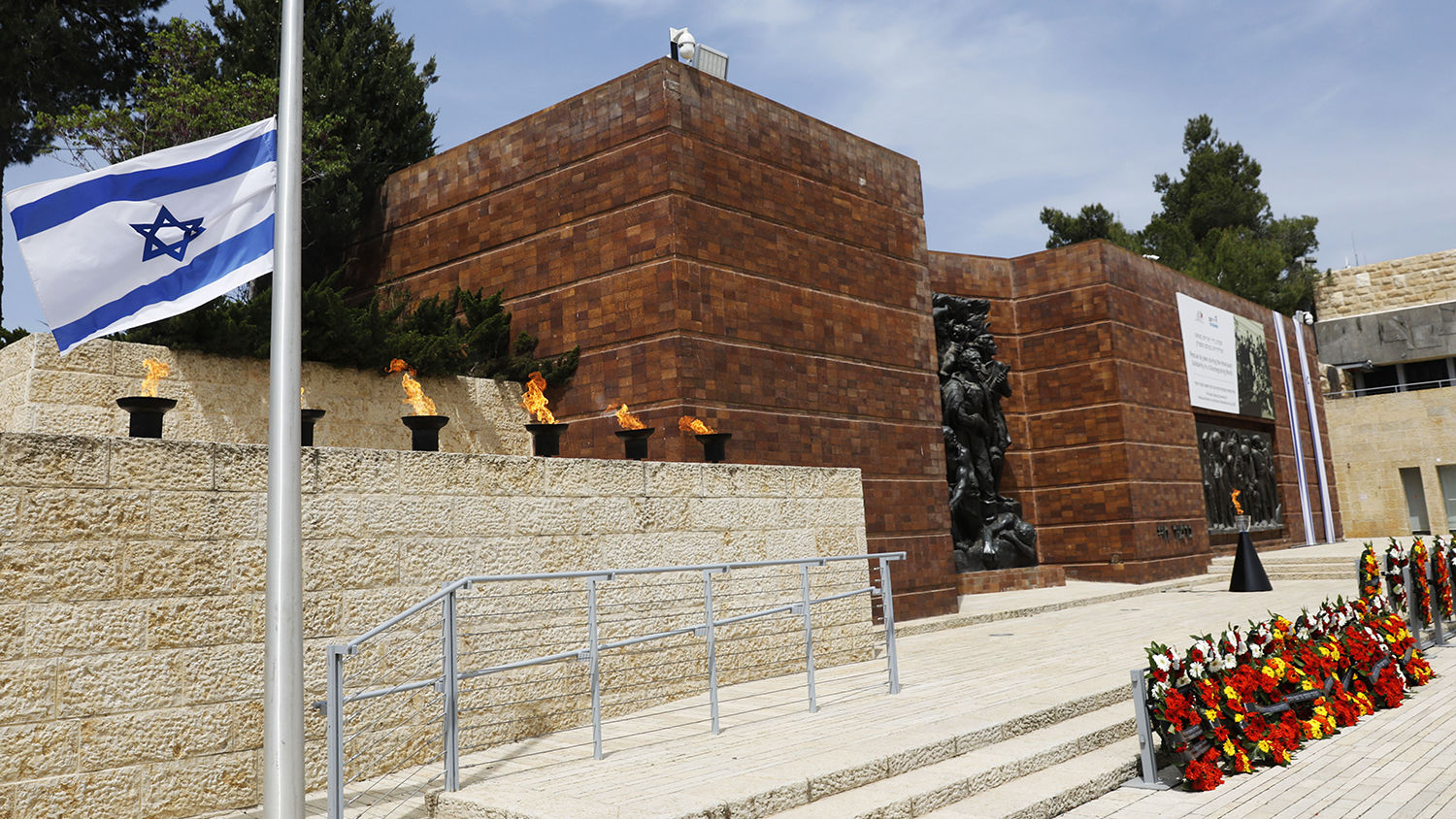 Six torches are lit in memory of Jewish Holocaust victims during an April 21 ceremony without participants due to the COVID-19 pandemic, marking Holocaust Remembrance Day at the Yad Vashem Holocaust memorial in Jerusalem.
MENAHEM KAHANA/AFP VIA GETTY IMAGES

Israel held its annual Holocaust Memorial Day ceremony on Monday night. Traditionally, six Holocaust survivors would light the torches and speak about their experiences to a large gathering at Warsaw Ghetto Square in the Yad Vashem Holocaust Museum in Jerusalem. However, amid the nation’s coronavirus lockdown, this year’s ceremony took place primarily online.

Host Danny Kushmaro addressed an empty square, musicians performed without a live audience, and speeches from Israel’s leaders and stories from Holocaust survivors were presented via video. For the first time ever, the Holocaust Memorial Day ceremony was streamed online.

According to the Jerusalem Post, Prime Minister Benjamin Netanyahu called the coronavirus outbreak the largest global crisis since the end of World War ii, noting that multitudes of Jews died from disease during the Holocaust due to the inhumane conditions imposed upon them. However, he continued, “Today we have a national home; we have our own country—a strong, advanced country, which is much appreciated.”

In the hours preceding the ceremony, thousands of people around the world uploaded virtual memorial messages expressing their support for Israel and stressing the need to fight anti-Semitism.

Here’s my view as we stopped to remember, this year from home. As it does every year, the siren sounds across Israel and everything stops as people now their heads in memory of the millions lost to the Jewish People during the Holocaust.#YomHashoah #HolocaustRemembranceDay pic.twitter.com/1kXk3pUdoH

The Holocaust Martyrs’ and Heroes’ Remembrance Day memorializes the 6 million Jews killed in Nazi death camps. It serves as a yearly reminder of the dangers of anti-Semitism and where it will lead if not expunged.

The historical exhibition at Yad Vashem shows how growing acceptance of anti-Semitism in Europe during the 1930s quickly spiraled into the systematic mass murder and elimination of the Jewish people in the 1940s. Anti-Semitism became more and more accepted and, eventually, even encouraged.

Today, anti-Semitism is again on the rise, primarily in Europe. According to United Kingdom Home Office data, the UK saw 1,326 hate crime offenses against Jews in 2018–2019, up from 672 the previous year; that’s a 97 percent increase, nearly double the recorded amount of anti-Semitic hate crime. More anti-Semitic incidents occur every year, not only in Britain, but throughout the Western world.

According to the Kantor Center’s Anti-Semitism Worldwide 2018 General Analysis, 13 Jews were killed in 2018, the largest number in recent years. The report said the number of “major violent cases” increased by 13 percent, from 342 to 387. The countries with the highest number of cases were the United States, United Kingdom, France, Germany, Canada, Belgium and the Netherlands. According to the Kantor Center’s database, the numbers were higher in North America and Western Europe than in Eastern Europe.

In the latest issue of Watch Jerusalem, editor in chief Gerald Flurry explained how worldwide diseases, such as the black plague, led to the persecution of the Jewish people. The Jews’ following of biblical hygienic practices meant their death rates were lower; non-Jews “grew resentful and angry” and persecuted the Jews. Today, more and more articles are claiming that Israel created the coronavirus in order to develop and sell a vaccine to make money off the pandemic.

How have these absurd claims become common and accepted? Why are the Jews so hated? There is a reason why this deep-seated hatred exists in the Western world. For more about anti-Semitism and why it is so prevalent today, please read Chapter 8 of Mr. Flurry’s book The Key of David.

Get Our Magazine Request your free subscription
to Watch Jerusalem magazine
Subscribe
Related
Germany and the Holy Roman Empire
Many people are aware of the atrocities committed by Germany in World War II but would consider them ancient history. These people are completely unaware of the legacy which Adolf Hitler drew upon in creating his Nazi war machine. His was merely the latest resurrection of a war-making empire with a long and bloody history. Did you know that the Bible prophesied of his regime-as well as the terrible emergence of one last resurrection in our day?
Request Now