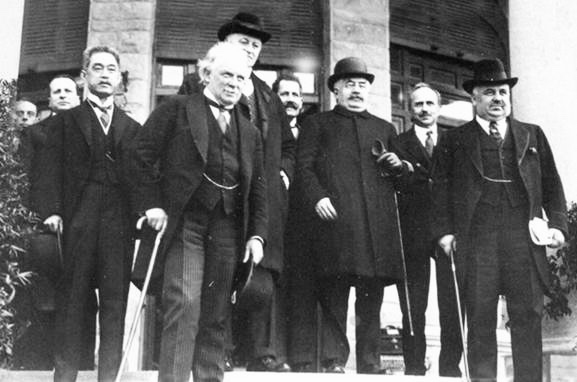 jerusalem
One hundred years ago, world powers assembled at San Remo, Italy to discuss how to divide the Ottoman Empire. In respect to the Jewish people, the so-called San Remo Declaration charged the British with implementing the Balfour Declaration, which three years earlier had endorsed “the establishment in Palestine of a national home for the Jewish people.”

The decision was unanimous by the allied powers at San Remo, and was later confirmed by all 59 members of the League of Nations. There was to be a Jewish Homeland, overseen by the British until statehood could be affirmed.

On today’s program, host Brent Nagtegaal looks back at the San Remo declaration and shows how it received complete support throughout the world. This included, significantly, the Arab leadership in the region. He also shows why recent retelling of Israel’s birth seeks to downplay the history of San Remo, and focus more on the post-holocaust establishment of the Jewish State.

Netanyahu Puts Sovereignty Above All Else in Unity Deal

Will the Trump Peace Plan Bring Peace to Israel?

San Remo: The original ‘deal of the century’

Get Our Magazine Request your free subscription
to Watch Jerusalem magazine
Subscribe
Offers
Jerusalem in Prophecy
Jerusalem means “city of peace,” and yet this city’s history has been filled with rivers of blood! No city has suffered like Jerusalem. It has known almost no peace. But there is very good news. God established Jerusalem to be a city of peace—and will one day make sure that it becomes so! It is actually the city from which God will rule the entire universe!
Request Now