The Vatican Knew of Jewish Genocide but Did Nothing 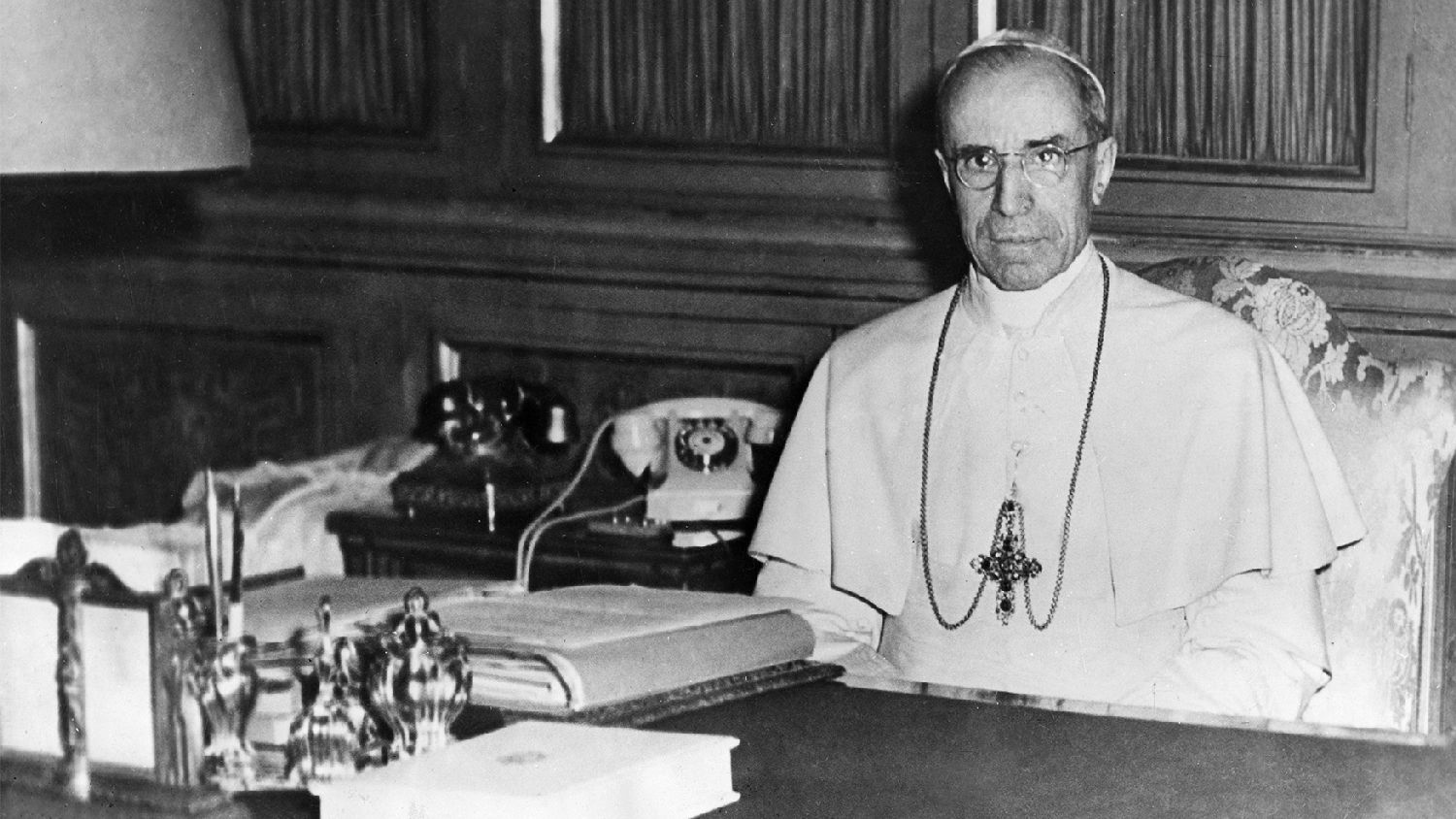 On Friday, many will celebrate the 75th anniversary of Victory in Europe Day, which brought an end to the German Nazi war machine that oversaw the deaths of 70 million people during World War ii.

No doubt, in the lead-up to the celebration, individual stories of valor and heroism that contributed to the triumph of the Allies will be retold by the dwindling number of eyewitnesses.

But this year there is also another story being told; not one of sacrifice and courage, but of silence.

On March 2, around 60 historians and journalists braved a trip to coronavirus-laden Italy to make the most of unparalleled access to the Vatican Apostolic Archive, specifically, the wartime records of Pope Pius xii. In 2019, Pope Francis announced he would open the cache of historic documents to independent researchers to uncover the relationship between the Catholic Church and Nazi Germany. The critical question was how much did Pope Pius xii know about the Nazi atrocities against the Jews.

Originally called Eugenio Pacelli, Pius had been harried by claims of turning a blind eye to the Nazi genocide of the Jews. From his election to the papacy in 1939 to his death in 1958, he remained silent on the issue. In the late 1990s, devout Roman Catholic historian John Cornwell was given access to this same archive to find proof to counter claims that Pius aided and abetted the Third Reich.

Instead, he found the opposite. In the words of Cornwell, “Near the end of my research I found myself in a state I can only describe as moral shock. The material I had gathered, taking the more extensive view of Pacelli’s life, amounted not to an exoneration but to a wider indictment. Spanning Pacelli’s career from the beginning of the century, my research told the story of a bid for unprecedented papal power that, by 1933, had drawn the Catholic Church into complicity with the darkest forces of the era. I found evidence, moreover, that from an early stage in his career, Pacelli betrayed an undeniable antipathy toward the Jews, and that his diplomacy in Germany in the 1930s had resulted in the betrayal of Catholic political associations that might have challenged Hitler’s regime and thwarted the Final Solution.”

Cornwell’s research culminated in his 1999 book titled Hitler’s Pope. Although Cornwell’s book would go on to become an international best-seller, it didn’t take long before other historians criticized the book for inaccuracies. Others sought to test Cornwell’s claims by going back to the original source documents. But the Vatican closed its doors to the archive shortly after Cornwell’s book was published. And it intended to keep it closed until 2028.

No wonder then, when the doors opened to the archive on March 2 this year, 60 of the 200 independent researchers cleared by the Vatican made their way to Italy, regardless of the coronavirus. Among the group was a German team from the University of Münster led by Herbert Wolf, a historian of the Catholic Church who had worked with other documents in the archive in the past. Unfortunately, only one week later, coronavirus’s spread in Italy led to the premature closure of the archive.

However, as international media learned this week, one week was enough for Wolf and his colleagues to find more evidence showing that the Vatican knew much more about Nazi atrocities against the Jews than it had revealed in the past, and far earlier.

Wolf claims that he has found evidence that word of Nazi atrocities against the Jews was received at the highest levels of the Vatican as early as August 1942, but they dismissed the claims of the reports.

Wolf’s report notes that on Sept. 27, 1942, United States President Franklin Roosevelt’s personal envoy to the Vatican, Byron Charles Taylor, sent a letter to the Vatican requesting confirmation of reports of the mass murder of Jews taking place in extermination camps inside Nazi-occupied Poland. Taylor’s letter was based on a report distributed a month earlier by the Jewish Agency that also discussed the liquidation of the Warsaw Ghetto, where 100,000 Jews had been killed. The report also detailed that Jews from Germany, the Netherlands, Slovakia and Belgium were also transported to Poland to be slaughtered.

Wolf’s team found evidence that Pius read the message from Taylor the day it was received.

Taylor also requested that the Vatican confirm the report of Jewish annihilation at the hands of the Nazis and then have the pope use his power to enlist public opinion and mobilize the civilized world to put a halt to the killings.

History shows that the pope took no such action, but instead remained silent.

After a follow-up letter by Taylor, the Vatican responded on Oct. 10, 1942, basically stating that the pope “had heard about the harsh treatment on the Jews” but could not verify the information.

But is that true?

We now know that the Vatican received at least two other reports detailing the Nazi slaughter of the Jews prior to receiving the first letter from the U.S. envoy. As reported in Haaretz, the Ukrainian archbishop wrote to the Vatican in August 1942 informing it of the atrocities he had seen in the Lviv ghetto, where tens of thousands of Jews were shipped off to extermination camps.

Then, just over a week before Taylor’s letter arrived, Pius’s assistant, Giovanni Battista Montini, who would become pope in 1963, received another bit of startling information. This time, it came from an Italian businessman who had just returned from Poland where he had witnessed a slaughter of shocking proportions by the Nazis on the Jews.

According to Wolf’s discoveries at the archive, an internal Vatican memo, written by then papal adviser Angelo Dell’Acqua, circulated at the time. Dell’Acqua dealt with all of these claims. Dell’Acqua wrote, in reference to the Jewish Agencies report of the extermination camps in Poland, “they need to be verified because the Jews also tend to easily exaggerate.” The memo also cast doubt on the Ukrainian archbishop’s claim, with Dell’Acqua writing that Eastern Catholics were not “an example of reliability.”

“This is a key document that has been kept hidden from us because it is clearly anti-Semitic and provides background on why Pius xii did not speak out against the Holocaust,” Wolf recently told a Munster Catholic paper.

Indeed! It shows that although it had received several credible reports, the Vatican refused to condemn the slaughter of the Jews.

On Dec. 17, 1942, after more evidenced surfaced of Nazi mass killings of the Jews, Britain, the U.S. and Russia came together to issue a joint statement revealing the Nazi extermination policy to the world. But the Vatican still remained silent.

A week later, Pius had the perfect opportunity to show his solidarity with the Jews and with humanity against the Nazis in his special Christmas radio broadcast. He said: “Humanity owes this vow to those hundreds of thousands who, without any fault on their part, sometimes only because of their nationality or race, have been consigned to death or to a slow decline.”

You could say the Holocaust was being implied through this statement by the pope. But as other historians have noticed, this veiled mention only makes up 27 words of the full 26 pages of text.

Armed with the same knowledge, the pope had the chance to side with Allies and issue a courageous denunciation of the unparalleled crimes taking place against the Jews. But he could not even mention the word Jew, the main target of the Nazi repugnant ideology.

This one revelation from one week in the Vatican Archive shows that there is much more history to be uncovered in the relationship between the Third Reich and the Vatican before, during and after World War ii. Our free reprint article “The Pope, the Vatican and the Holocaust” details more compelling evidence of deeper collusion.

But one aspect of that history that researchers won’t find among the documents is why the pope was silent in the face of Jewish genocide. Why would the leading Christian denomination side with a fanatical power that was exterminating a race of people?

This is not an easy question to answer, but the Bible provides one. That answer is expounded in our free book The Holy Roman Empire in Prophecy.

This book places secular history of the Third Reich alongside history and prophecy in your Bible. It shows that the Third Reich was prophesied to rise. Hitler’s kingdom was only the sixth incarnation of the same church-state system that has tried to rule Europe repeatedly throughout history. This free book will help you see and prepare for the final resurrection of this empire that is shortly ahead of us.

If you haven’t yet, please request and read our free book The Holy Roman Empire in Prophecy.

Offers
Jerusalem in Prophecy
Jerusalem means “city of peace,” and yet this city’s history has been filled with rivers of blood! No city has suffered like Jerusalem. It has known almost no peace. But there is very good news. God established Jerusalem to be a city of peace—and will one day make sure that it becomes so! It is actually the city from which God will rule the entire universe!
Request Now