The 1,900-year-old Jewish ‘souvenir’ of a Roman legionary
By Christopher Eames 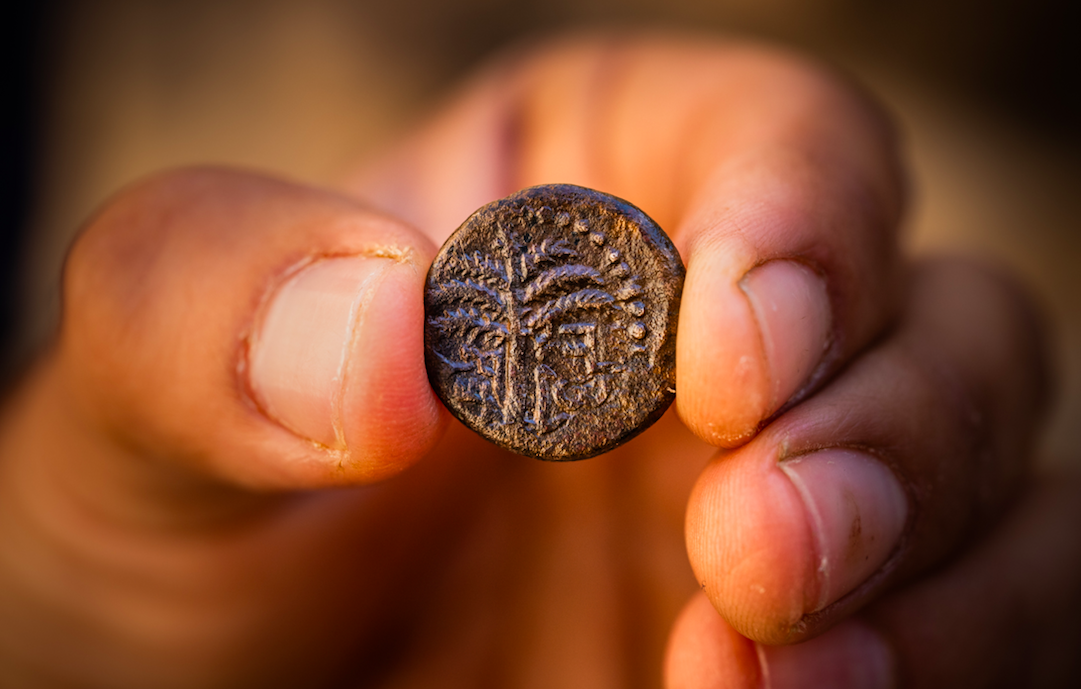 The Bar Kochba Revolt coin is inscribed with the word “Jerusalem” and a picture of a date palm.
Koby Harati, City of David Archive
From the May 2020 Watch Jerusalem Print Edition

An exceptionally rare bronze coin, minted during the Bar Kochba Revolt (132–135 c.e.), has been discovered in recent excavations in Jerusalem. For some idea of how rare this coin is: Over 22,000 coins have been discovered within the Old City of Jerusalem. Of those, only four have dated to the time of this revolt. Further, this is the only one of those coins to bear the name “Jerusalem.”

One side of the coin bears an inscription reading “Year Two of the Freedom of Israel,” together with a grapevine; the other is stamped with the “Jerusalem” inscription and a palm tree.

The release of this new discovery on Monday was timed to coincide with Lag B’Omer (“33rd Day of the Omer”), a holiday commemorating the death of the second-century c.e. rabbi Shimon bar Yochai and those who fought in the Bar Kochba Revolt.

The Bar Kochba Revolt occurred some 60 years after the Great Revolt (66–73 c.e.), in which the Romans conquered Jerusalem and destroyed Herod’s temple. It was the third and final of three Jewish revolts against the Roman Empire (the second was the Kitos War, 115–117 c.e.). The revolt was led by Shimon bar Coseba, restylized to “bar-Kochba” (son of the star)—a figure that many of the Jews at the time viewed as the prophesied Messiah. The early careful planning and initial successes of the rebels meant that Roman forces had to be drafted from other parts of the empire to put down the rebellion. Up to 12 legions were mobilized, finally defeating the rebels through scorched-earth tactics—resulting in the destruction of some 50 Jewish fortresses, 1,000 towns and the deaths of nearly 600,000 Jews (according to the third-century Roman historian Dio Cassius; this death toll was followed by many more as a result of disease and famine). Still, the Roman victory came at a severe cost: the destruction of two full legions, the near-destruction of a third, and the disbanding of another (possibly two).

The coin was discovered during excavations by the Israel Antiquities Authority in the William Davidson Archaeological Park, located between the Temple Mount and City of David. The peculiarity of this particular find hinges on its discovery within Jerusalem. Other examples exist from other sites in Israel; however, the rebels never conquered Jerusalem, which had been held firm by the Roman 10th Legion (but which sustained heavy casualties during the rebellion). The Israel Antiquities Authority archaeologists believe it was a “souvenir” belonging to one of these Roman legionaries stationed at Jerusalem. Nearly 20 other such coins have been found around Europe—likewise, apparently having been brought back as souvenirs from the European legionaries who had to be drafted to put down the major Judean rebellion.

Discovery of a rare coin!

Fun fact #1: It’s the first coin found within Ancient #Jerusalem from the Bar Kochba revolt (132 - 135 CE) with the word Jerusalem inscribed on it.

Discover more fun facts about the coin in the video

The discovery and presentation of Revolt-era coins on significant dates is becoming somewhat of a theme. In 2018, Dr. Eilat Mazar (together with Watch Jerusalem excavation staff) released to the public a special Great Revolt Year Four coin hoard from the Ophel Cave excavation, just in time for Passover. And prior to the 2017 celebration of Jerusalem’s 50th year anniversary of reunification, Minister of Culture Miri Regev presented a Great Revolt Year Two coin to Prime Minister Benjamin Netanyahu. At the time, Regev commented:

I thought it would be a festive and exciting present to give you the coin that was found in the Old City two weeks ago. This coin, prime minister and my colleagues, belongs to a series of coins minted during the Great Revolt against the Romans, which have previously been found in various places. On one side of the coin there is a vine with Hebrew letters—“Freedom of Zion,” and on the other side, an omer cup. To me, this shows the close and unbroken link of the history of the Jewish people to Jerusalem, our eternal capital.

The same could certainly be said for this latest numismatic discovery.

Get Our Magazine Request your free subscription
to Watch Jerusalem magazine
Subscribe
Related
Offers
Germany’s Conquest of the Balkans
What has happened in former Yugoslavia over the past several years reaches far beyond the boundaries of that region. It is so shocking that the nations of this world would be paralyzed with fear if they truly understood! Shamefully, America is its chief architect.
Request Now