The Danger of a United States Withdrawal From the Sinai 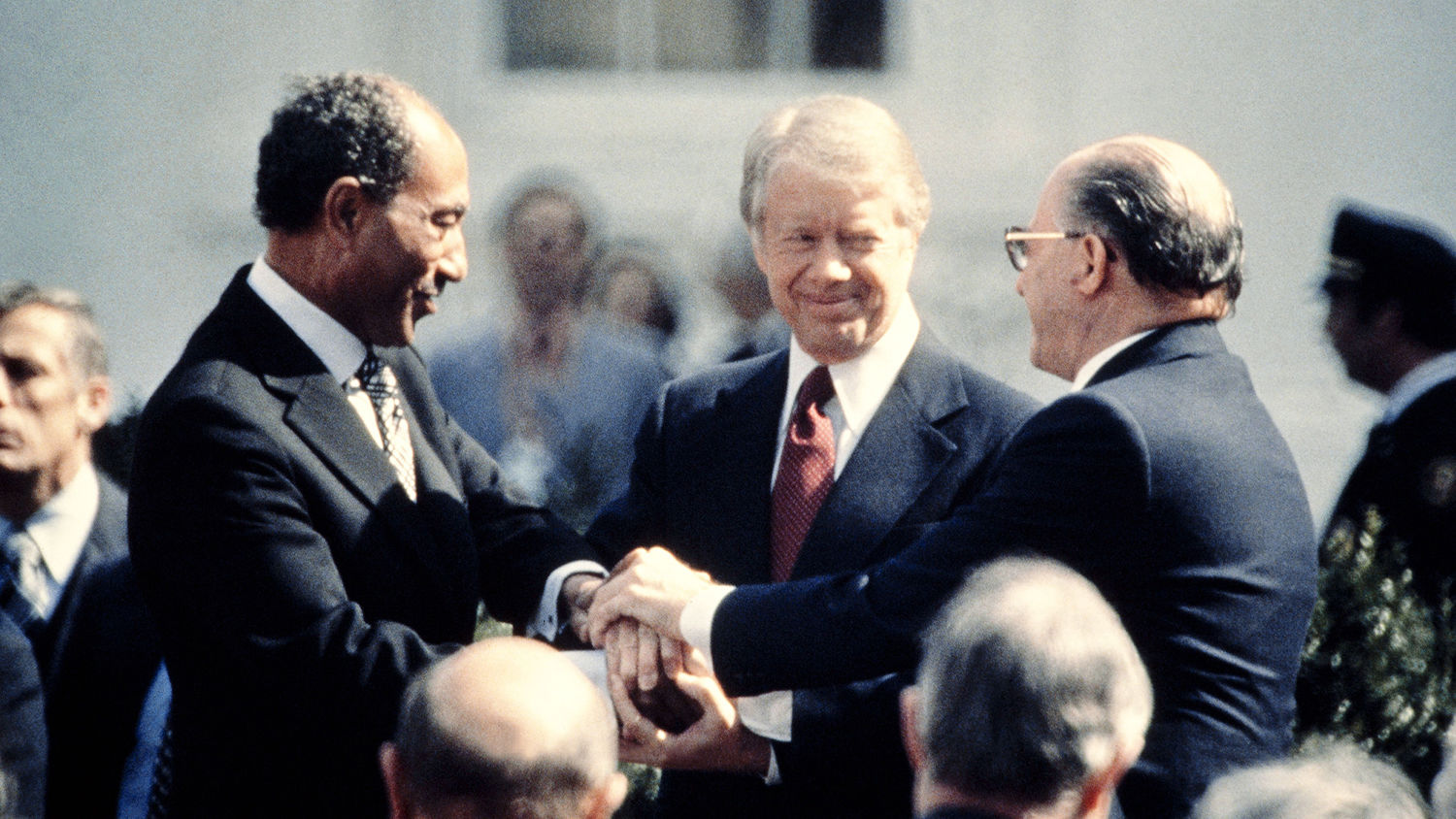 For the past 40 years, the Egypt-Israel Peace Treaty has provided the foundation of Israel’s security doctrine. All of its nation-threatening wars—1948, 1967 and 1973—took place before the peace treaty with Egypt was enacted in 1979.

Though there have been many wars between Israel and its northern neighbors in the time since, Egypt has remained out of the fight. And without the worry of supplying troops to its southern flank, Israel has been able to focus on defending the north of Israel from Iran and its proxies.

In effect, the peace pact with Egypt has prevented Israel from having to worry about a serious multifront war.

The simple quid pro quo of the peace treaty was this: Israel gives the Sinai Peninsula back to Egypt, and then Egypt severely limits its number of troops in the Sinai. The Sinai would become a buffer between Israeli and Egyptian forces. And if Egypt ever decided to break the treaty and storm toward Israel, the Israel Defense Forces would have time to mobilize before Egypt reached Israel’s population centers.

But what would happen if the peace treaty were nullified and Israel once again had to contend with an enemy on its southern border?

What would happen if hostile forces, perhaps linked to Iran, were operating in the Sinai Peninsula as they do in Southern Lebanon or on the Syrian Golan Heights?

The result would be a return to the dangerous reality Israel faced before the peace treaty.

While there is no discussion between Israel and Egypt about tearing up the document, decisions being made right now in Washington, D.C., might have the same effect.

The Deterring Effect of U.S. Forces

Behind closed doors, Egypt’s government under Abdel Fattah al-Sisi maintains a friendly working relationship with Israel. His government continues to abide by the Egypt-Israel Peace Treaty of 1979, just as the governments of Anwar Sadat and Hosni Mubarak did before him. Israel routinely works with Egypt’s military to stop weapons smuggling to Hamas in the Gaza Strip.

In 2011, Israel backed the Egyptian military’s request to increase its troop presence in the Sinai Peninsula to fight Islamic forces taking refuge there. As part of the treaty, Egyptian forces had been limited in their access to the Sinai. Instead, a peacekeeping force known as the Multinational Force and Observers (mfo) was located in the Sinai to monitor the border between Egypt and Israel. As the mediator of the peace deal, American forces provided the largest number of troops in the peacekeeping force.

Egypt’s fight against Sinai terrorists has continued into 2020, but now the United States is considering removing all its military forces from the peninsula.

When the Arab Spring took hold of Egypt, jihadists used the largely ungoverned space of the Sinai as a breeding ground for terrorist attacks against Egypt and Israel. Eventually, a branch of the Islamic State was established in the Sinai. Responding to the situation, the Egyptian government asked if it could increase its forces in the Sinai to combat terrorism.

Israel acquiesced to the request, partly because a destabilized Sinai was a danger to its own safety. And partly because the continued presence of the mfo in the Sinai could observe the Egyptian military to be sure it stuck to fighting terrorists rather than repurposing its forces to threaten Israel.

Egypt’s fight against Sinai terrorists has continued into 2020, but now the United States is considering removing all its military forces from the mfo. If the 450 American troops currently stationed in the Sinai leave, it’s possible that the other members of the 1,100-member force would leave too.

The U.S. is considering the move because Egypt-Israel relations are very strong, so it considers its troop presence unnecessary and, therefore, an unnecessary cost. U.S. Defense officials told the Wall Street Journal on May 7 that Secretary of Defense Mark Esper “feels the U.S. military effort in northern Sinai isn’t the best use of department resources—or worth the risk to troops stationed there. Egypt and Israel have maintained a durable peace for four decades.”

Esper is correct that the border is relatively peaceful right now, but a U.S. withdrawal would undermine one of the important aspects of the peace deal. Egyptian troops were never intended to be inside the Sinai Peninsula as their closer proximity to Israel poses an immediate threat to Israel’s security.

Israel only accepted the influx of Egyptian troops into the Sinai because the U.S., a friendly Israeli ally, could provide oversight and monitor the Egyptian forces. Now that the U.S. might leave, Israel will be left without the deterring effect of a U.S. presence.

If Egyptian forces don’t leave the Sinai when the U.S. vacates, Israel will lose the most important strategic outcome of the peace agreement.

It would be unfair to demand that Egypt withdraw from the Sinai while it is in the midst of a war against terrorism there.

However, if Egyptian forces don’t leave the Sinai when the U.S. vacates, Israel will lose the most important strategic outcome of the peace agreement: the Sinai buffer zone between Egypt’s and Israel’s population centers.

For the moment, Egypt’s and Israel’s security needs align in the Sinai Peninsula, so Israel is not overly concerned with the presence of Sisi’s forces so close. However, as we witnessed in the Arab Spring, Egyptian politics are unstable.

A Radical Egypt on Israel’s Border?

Watch Jerusalem editor in chief Gerald Flurry has forecast a radical change in Egyptian politics in the near future. That change will likely be similar to what took place during the 2011 Arab Spring, which brought down Egyptian strongman Hosni Mubarak, a strong believer in the Egypt-Israel Peace Treaty.

Morsi’s 2012 campaign launched with Egyptian cleric Safwat Higazi telling an enthusiastic crowd with Morsi in the front row, “We can see how the dream of the Islamic caliphate is being realized, Allah willing, by Dr. Mohamed Morsi. … The capital of the caliphate … will be Jerusalem, Allah willing” (translation by Middle East Media Research Institute).

Thousands cheered and chanted, “Morsi will liberate Gaza tomorrow,” “Millions of martyrs march toward Jerusalem,” and “Come on, you lovers of martyrdom, you are all Hamas.”

While Egyptian rule under Morsi lasted only a short time, the vision of Islamic rule in Egypt was realized. A return to Muslim Brotherhood rule inside Egypt poses a continual threat to Israel’s security.

That threat becomes more serious if Egyptian forces are already in the Sinai and there is no U.S. forces to deter them from acting against Israel. At which point, Israel’s peace treaty with Egypt will be nothing more than a piece of paper.

As Mr. Flurry explains in his booklet The King of the South, a radical change is coming in Egyptian politics that will see its return to Islamic rule. His forecast is based on a latter-day prophecy in the book of Daniel, which says Iran will lead an Islamic alliance known as the king of the south and it will include Egypt.

Without this prophetic understanding, it would be easy to justify a U.S. removal from the Sinai. Knowing that Egypt will be part of this Iranian-led alliance, however, shows the U.S.’s decision could have far more dangerous consequences than intended.

For a complete understanding of how the coming Egyptian-Iranian alliance will factor into the timeline of latter-day events, request our free booklet The King of the South.