The seal of a royal servant to the king, discovered at Megiddo
By Eleanor Clarke • May 24 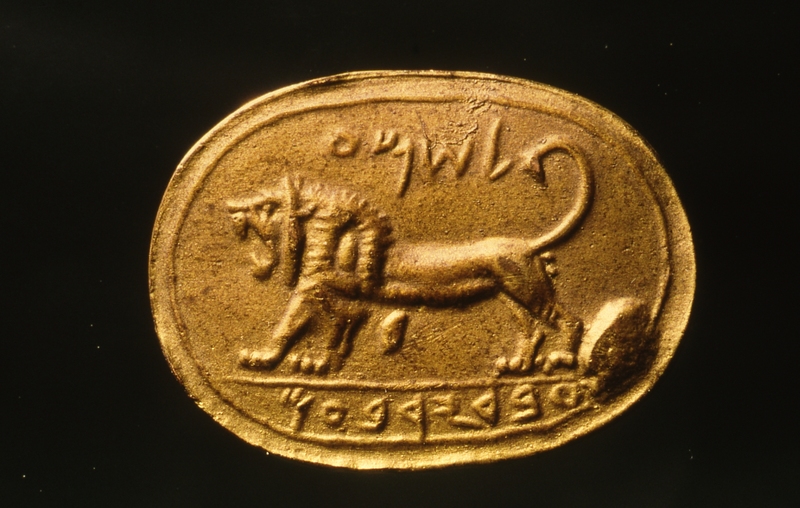 In 1904, a small jasper seal was discovered in an excavation dump in Megiddo. The seal depicts a majestic roaring lion with the inscription: “Belonging to Shema, the servant of Jeroboam.”

American-born archaeologist Gottlieb Schumacher led his team in a three-year excavation of Megiddo from 1903 to 1905. The seal was dated around the mid-eighth century b.c.e.; thus, the Jeroboam mentioned must have been none other than King Jeroboam ii of Israel.

King Jeroboam ii was Israel’s longest-reigning monarch, ruling from 790 to 750 b.c.e. He presided over a period of tremendous affluence and power. His rule saw Israel’s borders expanded and its wealth increased. This national resurgence is recorded in 2 Kings 14:23-24, 27:

Generally, only prominent figures had a personalized seal impression. The title “servant of the king” indicates that Shema was a high-ranking official in Jeroboam’s court. The word “servant” is the Hebrew word ebed, used in the Bible as one of high rank in the government. 2 Kings 22:12 lists “servant of the king” among other royal titles. Several other seals uncovered from the late Iron Age also bear the title.

The Bible shows that the name Shema was commonly used throughout this period. There are five individuals mentioned with the name Shema, ranging from the period of Joshua’s conquest of the Promised Land to Ezra and Nehemiah’s restoration of Jerusalem (Joshua 15:26; Nehemiah 8:4). Although the Bible doesn’t mention a Shema serving in Jeroboam’s court, the name is hardly out of place.

The roaring lion motif was also common in ancient Israel and Judah. The lion was most famously associated with the tribe of Judah (Genesis 49:9), but Israel also used the lion as a metaphorical symbol of destruction, power and ferocity. No lions remain in the area today, but in biblical times they were common. No other wild animal is mentioned more in the Bible than the lion; they are referred to by six Hebrew words that occur 135 times in the Bible.

The Prophet Amos, who personally warned King Jeroboam ii, referenced the lion several times in his book. Amos 3:4 says: “Will a lion roar in the forest, When he hath no prey? Will a young lion give forth his voice out of his den, If he have taken nothing?” Later in the same chapter he writes: “The lion hath roared, Who will not fear?” (verse 8). The lion was a symbol of strength and was to be feared.

Unfortunately, the original jasper seal was “lost” en route to the Istanbul Museum. All that remains today was the detailed bronze impression that the researchers at Megiddo cast before it left the excavation. In that bronze cast, King Jeroboam ii’s place in history has been preserved, backing up the biblical account of one of Israel’s most prominent kings.