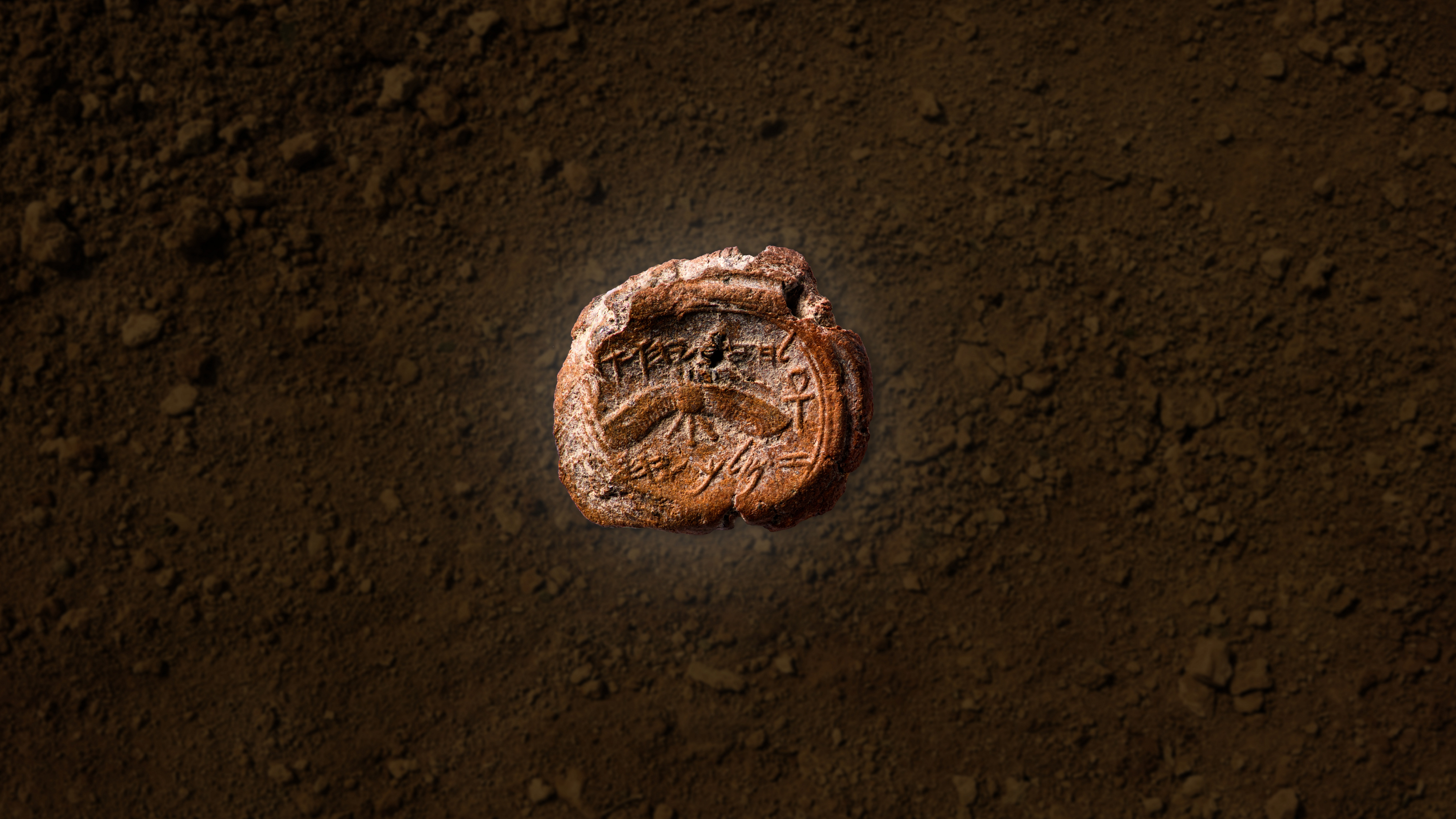 The Hezekiah bulla is the only seal impression belonging to an Israelite or Judean king ever to have been found in controlled scientific excavations. It was found just three meters away from the Isaiah bulla, in the same assemblage of soil, dating to the time period of Hezekiah (late eighth century b.c.e.).

The bulla was unearthed in 2009; however, due to some minor damage to its face, the full significance of what was written on it wasn’t realized.

In full, the bulla reads:

“Belonging to Hezekiah, [son of] Ahaz, King of Judah.”

The inscription on this bulla not only proves the existence of the powerful Judean King Hezekiah, but also confirms the existence of his father, King Ahaz. The symbols on the Hezekiah bulla also provide an interesting glimpse into royal Judean life.

While this is the first Judean seal to be unearthed in a professional excavation, several other seals belonging to King Hezekiah have come to light in the antiquities market (AM)—a place where artifacts of unknown provenance are bought and sold. This new seal impression helps confirm the legitimacy of the AM seals belonging to Hezekiah. Some of these AM seals bear the image of a scarab beetle with proud, upturned wings, rolling a sun disk. This is a deeply Egyptian symbol of the creator-god Khepri. The Prophet Isaiah warned against the Egyptian influence creeping into Judah before the Assyrian invasion (e.g. Isaiah 30-31). Hezekiah’s scarab seals would underscore the reason for those warnings. In addition to these seals, a number of lmlk jar handle seals belonging to Hezekiah bear an inscription of a winged scarab.

This new bulla indicates a significant change in royal logo design. As summarized by Dr. Eilat Mazar, based on the design, this seal can best be attributed to the time directly after Assyria’s invasion and Hezekiah’s miraculous healing. The rare display of a sun with downturned wings indicates protection. The ankh motifs at the sides, while still essentially Egyptian in nature, are universally understood to symbolize life—thus, the added years of Hezekiah’s life after his healing. Several biblical verses parallel the sun and wings imagery. For example, Psalm 84:12: “God is a sun and a shield”; Psalm 91:4: “He shall cover thee with His pinions, And under His wings shalt thou take refuge”; Ezekiel 16:8: “I spread My wing over you” (New King James Version). In particular, the imagery on this bulla is vividly expressed in Malachi 4:2: “The Sun of Righteousness shall arise with healing in His wings …” (nkjv).

The winged sun may also carry additional meaning—hearkening to the miracle performed at the time of Hezekiah’s healing, when the sun “moved” and the shadow on the sundial of Ahaz turned backward 10 degrees (2 Kings 20:9-11). Perhaps even the lines extending from the sun—terminating in circular dots—are a depiction of this sundial, rather than solar rays.

lmlk seals were stamps on the handles of official vessels used during the reign of King Hezekiah. The handles bear the inscription lmlk, Hebrew for “Belonging to the King.”

A large percentage of lmlk seals bear the image of a two-winged sun—perhaps these were produced alongside this new royal seal in the latter part of Hezekiah’s life as a broad administrative change to the winged scarab lmlk seals and early personal seals of Hezekiah.