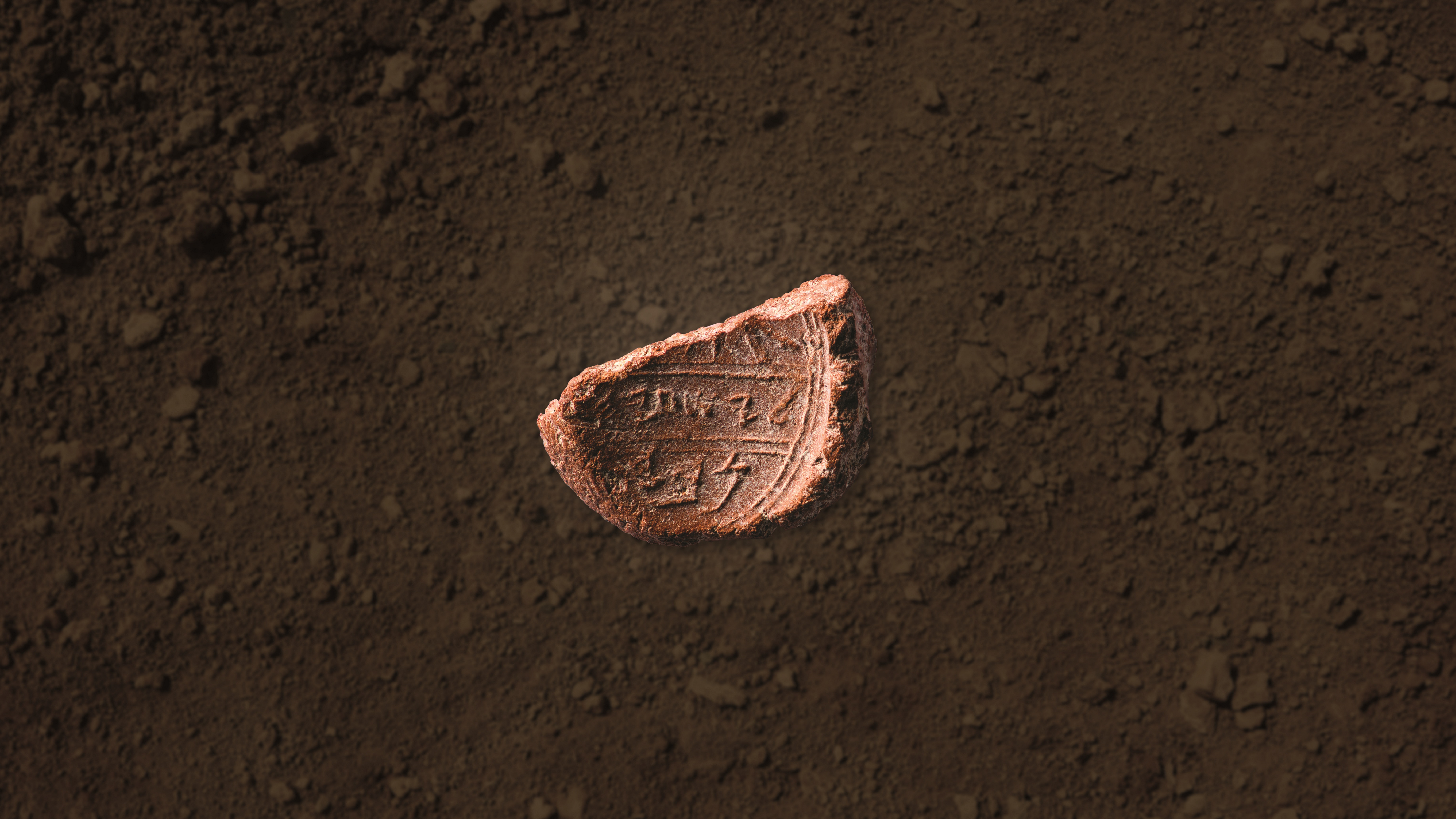 In 2009, the Isaiah bulla was unearthed together with the Hezekiah bulla by Dr. Eilat Mazar and her team, including students from Herbert W. Armstrong College. The seal was discovered next to the massive Solomonic-period Ophel walls. However, Dr. Mazar was not able to complete her study of the Isaiah bulla until 2018. News of the discovery was finally released in February 2018.

The long wait between the bulla’s discovery and its release was due in part to ensuing excavations and the study of
the Hezekiah bulla. But another reason was that there was some difficulty in interpreting the bulla’s inscription.

The Hezekiah bulla is indisputable proof of the existence of the Judean king and his father, King Ahaz. Analyzing the Isaiah bulla, however, is more complicated. There is some debate in the scientific community as to whether or not this seal really belonged to the Prophet Isaiah. This debate is outlined below.

Unlike the Hezekiah bulla, the Isaiah bulla has sustained heavy damage. Much of the upper half of the bulla is broken off. This missing portion does not hinder interpretation, however, because the top half contained a motif, not text (as shown by a small remaining sliver). The lower half of the bulla contains the all-important inscription bearing the name of the owner.

There are two lines of text. Both lines are slightly damaged on the left side by a thumbprint, probably made by the owner of the seal as he held down the edge of the clay while stamping it. This thumbprint erased some of the letters. In spite of the damage, the first line of script is easy to interpret: “Belonging to Isaiah ….”

The debate revolves around the text on the lower register. Three letters are legible: nvy. The Hebrew word for prophet is nvy’—a four-letter word, in which the final letter ‘ (called an aleph) is silent. With vowels, the word is pronounced “navy.” Despite the silent nature of the final missing letter, the aleph is a critical root letter for “prophet.” The explanation for this missing letter was simple—the thumbprint damage clearly covered where the letter would be expected (remember, Hebrew reads from right to left). Reconstructing the full inscription, we thus have “Belonging to Isaiah [the] Prophe[t].”

In spite of the simplicity of this solution, a complex semantic debate has taken place over whether the aleph existed. If it did not, the three remaining visible letters would leave two options: 1.) Nvy as a patronym (father’s name), or 2.) Nvy as an ethnicon (place of origin).

As a patronym, the bulla would read “Isaiah, [son of] Nvy” (a name probably pronounced “Novy”). Two impressions have been found at Tel Lachish, both made by a single seal, with the patronym “son of Nvy,” so there is a precedent for this name (despite the Isaiah bulla missing the “son of” attribution).

As an ethnicon, the bulla would translate to “Isaiah [the] Novite”—Nvy in this case pronounced “Novay,” someone of the biblical city of Nob (spelled Nv in Hebrew). While technically possible, this option is somewhat problematic. It is unusual for such a seal to identify someone as being “of” a city. Seals were meant to clearly identify the owner—and given that Isaiah was a common name, “Isaiah of Nob” would have been an exceptionally vague identification. Seals typically used a family name or specific title to identify an individual.

These are the two primary counterarguments in the debate, and were outlined by Dr. Mazar and her assistant Reut Ben-Aryeh when drawing their conclusions.

However, taking into account the preserved bulla border, Ben-Aryeh was able to retrace the overall outline of the bulla. This outline indicated that there was originally a four-letter word in the lower register—precisely the right amount of space for nvy’, prophet (as well as an h—“the”—at the end of the middle register—thus completing “Isaiah the Prophet”) .

Still, this does not conclude the debate. If there were four letters, and the final one wasn’t an aleph (making “prophet”), there could theoretically be any number of combinations. However, they are largely all speculative rather than rooted in known Hebrew words.

Of the 23,466 different words in the Hebrew Bible, there are two options for a four-letter word starting with nvy: the title prophet (nvy’)or the name Nebajoth (nvyt).

“Isaiah [son of] Nebajoth” is extremely unlikely. It is a foreign name given to only one individual early in the book of Genesis (a son of Ishmael)—predating the eighth-century b.c.e. bulla by over a millennium. After that period, it is referenced once as a place name, probably for these descendants of Ishmael. This name is found five times in the Bible—four of those spell the name with five letters (nvywt), which would not fit on the bulla. And if the middle line indeed included the infinitive h (“the”), as is indicated by the reconstructed border outline, this would further negate Nebajoth, as it would have to be an ethnicon—thus requiring an additional y to make “the Nebajothite”—and resulting in five or six letters, depending on the spelling of Nebajoth (nvyty or nvywty).

Long story short, based on textual analysis alone, the most logical four-letter word for the lower register is nvy’, “prophet,” ending in aleph—a word used 320 times in the Hebrew Bible. And upon recent reexamination of the bulla, it appears that a part of an aleph is visible in the bottom register, just above the fingerprint damage. There are some preserved lines matching the outline of an aleph. If this proves true, the bulla unquestionably reads: “Belonging to Isaiah the Prophet.”

But the above evidence cited comes from only a textual examination of the bulla. Many epigraphers stop there. But doing this overlooks some of the most important and compelling evidence that this seal belongs to Isaiah the prophet: the archaeological context.

Based on the findspot, this bulla dates to the late eighth century b.c.e., precisely the time that the Prophet Isaiah was on the scene. The bulla was found just outside the royal Ophel area, the very place where Isaiah served. And it lay barely 10 feet from the bulla belonging to King Hezekiah, a man Isaiah directly served alongside. These bullae were found in exactly the same assemblage and strata of soil. King Hezekiah and Isaiah the prophet are mentioned together in 16Bible verses. Their literal physical and biblical proximity is compelling.

Only high-ranking individuals carried personal seals. Two high-ranking, late-eighth-century b.c.e. Isaiah Nvy[?]s in the same place and time together? As Dr. Mazar herself wrote in Biblical Archaeology Review, the “chances of it belonging to any other but the known Prophet Isaiah are extremely slim.”

The sum weight of evidence thus points to this being the personal seal of Isaiah the prophet.

The placement of the damaging thumbprint, to steady the bulla, indicates that the user was righthanded. It is thus apparent that we here have the unique fingerprint of the prophet himself!

The upper half of the bulla had split off due to the string cord that bound the package beneath it, creating a weak point through the bulla. Further, the reserve side of the bulla bears a cloth sack imprint. This seems unusual at first, since one would naturally expect a prophet to seal a papyrus letter or some kind of written document. However, the bulla was found just outside what is believed to be the royal Ophel bakery area. Perhaps the sack contained a food item. Even this fits: In 2 Kings 20:7, Isaiah ordered a “cake of figs” to be delivered to a sick Hezekiah.