This bulla is the first extra-biblical proof of the existence of Bethlehem.
By Eleanor Clarke • June 11, 2020 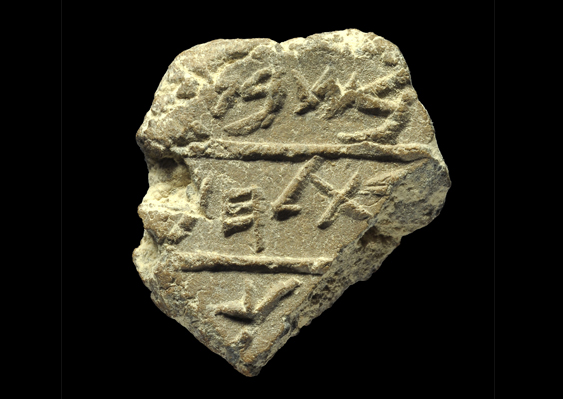 Bethlehem is a significant city in the Hebrew Bible. Mentioned more than 40 times, Bethlehem was the place of Rachel’s death and burial, the home of Boaz and Ruth, and the birthplace of Israel’s greatest king: David. And yet, until the year 2012, there was no extra-biblical proof that Bethlehem existed during biblical times.

In an archaeological excavation in the City of David, Jerusalem, a small clay seal was found near the Gihon Spring. The bulla, measuring about 1.5 centimeters, contains three lines of Hebrew text. The inscription reads:

In the seventh [year]

Recently, the City of David Foundation featured the Bethlehem seal impression as part of its new video series detailing discoveries in ancient Jerusalem (see below).

Until recently there was no archeological proof that Bethlehem, the birthplace of King David, existed during Biblical times

That all changed in 2012, with an incredible discovery in the City of David.

Join us in today’s episode of Bringing the #Bible to Life!

Most bullae, or clay seals, belonged to a person or government official of high rank. The seal would be used to mark any documents or objects with the owner’s authority. Eli Shukron, director of the excavation on behalf of the Israel Antiquities Authority, said in a 2012 press release that this bulla was not personal, but what is called a “fiscal” seal. Shukron explained:

The bulla we found belongs to the group of “fiscal” bullae—administrative bullae used to seal tax shipments remitted to the taxation system of the kingdom of Judah in the late eighth and seventh centuries b.c.e. The tax could have been paid in the form of silver or agricultural produce such as wine or wheat.

The seal dates back some 2,700 years. Although it was initially unclear whether it originated in the reign of Hezekiah, Manasseh or Josiah, most scholars today agree it likely came from the time of Hezekiah. King Hezekiah, a direct descendant of King David, reigned from approximately 724 to 695 b.c.e.

Shukron explained why this bulla was so important in biblical archaeology: “This is the first time the name Bethlehem appears outside the Bible, in an inscription from the First Temple period, which proves that Bethlehem was indeed a city in the Kingdom of Judah, and possibly also in earlier periods.”

The Bible refers to this town as Bethlehem, Bethlehem-judah, Ephrath and Ephratah. In 1 Samuel 17:12, David is referred to as “the son of that Ephrathite of Bethlehem in Judah, whose name was Jesse.”

Bethlehem means “house of bread” in Hebrew. But the name actually has pagan roots, originating with the Akkadian god of fertility, Lahmu, whom the Canaanites worshipped as Lehem. The Canaanite town was most likely built around a pagan temple known as Beyt Leḥem, or “house of Lehem.” The name Ephratah also carries the meaning of “fertile.”

The first biblical reference to Bethlehem is in Genesis 35: “And Rachel died, and was buried in the way to Ephrath—the same is Bethlehem” (verse 19). Bethlehem features prominently throughout the period of the judges and is the staging ground for the book of Ruth. Bethlehem is also famous for being the birthplace of King David and the location where the Prophet Samuel anointed him as king.

Bethlehem was a small city with a rich history. And this bulla affirms not only that the city existed during the First Temple period, but also that it had a strong connection with the capital, Jerusalem. It is fitting then, that this bulla was discovered in the City of David in Jerusalem.

The Prophet Micah prophesied of the connection between these two cities of David that would never be broken. Micah 5 states that the ruler of Israel would come out of Bethlehem. Christianity points to this verse as a prophecy of the birthplace of Jesus Christ. Judaism points to this verse to explain the heritage of the Messiah as a descendant of King David who would rule from Jerusalem. The prophecy reads, in verse 1:

But thou, Bethlehem Ephrathah, Which art little to be among the thousands of Judah, Out of thee shall one come forth unto Me that is to be ruler in Israel; Whose goings forth are from of old, from ancient days.

Get Our Magazine Request your free subscription
to Watch Jerusalem magazine
Subscribe
Related
The Former Prophets: How to Become a King
Request Now