Could this architectural capital reveal the glory of King David’s palace?
By Eleanor Clarke • June 21, 2020 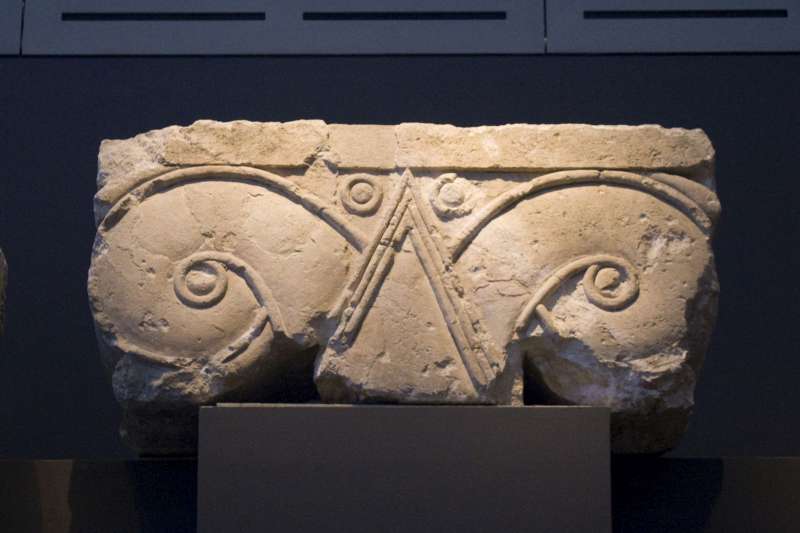 Proto-Aeolic capital discovered in the City of David
The Israel Museum, Jerusalem, by Amalyah Oren

Israel is littered with archaeological evidence of the great civilization that existed around Jerusalem during the First Temple period. One of the greatest examples and proofs of the royal grandeur and artistic mastery of the time are the proto-Aeolic capitals.

A proto-Aeolic capital is the stylized uppermost part of a column. It is highly decorative and makes the pillar more stable. The more ornate the pillar capital, the more prestigious the building it belonged to (more detail below).

The finest example of these capitals was found in Jerusalem in 1963. When digging on the eastern slope of the City of David, above the Gihon Spring, archaeologist Kathleen Kenyon discovered a massive proto-Aeolic capital broken in half. The capital was found among debris and ashlar stones that had fallen from a structure further up the hill hundreds of years ago.

This capital was exquisitely carved and the best sample of its kind in Israel. Kenyon praised the craftsmanship, saying: “The design of the outline and the lines of the relief of this capital are the finest of all the proto-Aeolic capitals in this country. The proportions achieve perfect harmony.” Prof. Yigal Shiloh, who conducted an extensive study of the proto-Aeolic capitals, said this capital “received an especially superior finish.”

What Is a Proto-Aeolic Capital?

Proto-Aeolic, or proto-ionic as it is sometimes called, refers to a particular style of capital. Proto comes from the Greek meaning “primitive” or “earliest.” Meaning that this style of capital, although very similar to the better-known Greek and Roman capitals, actually predates them, originating in Israel, with Phoenician influence.

Aeolic refers to the particular architectural style, which has two curving palmette volutes rising from the shaft and spreading outward. Some have suggested that a more appropriate name would be: the Israeli Palmette capital. The palm motif is present in both Israelite and Phoenician designs. It was used to decorate Solomon’s temple (1 Kings 6:35). This region became so widely known for it that today it is depicted on the Israeli 5-shekel coin.

In his article “The Origin and Date of the Volute Capitals From the Levant,” Tel Aviv University professor Oded Lipschits said that these capitals were among the most impressive in Israel and Jordan. He wrote that the “size of the capitals, their weight, the quality of their carving, and their impressive design” provide an indication of the scale and opulence of the gates and palaces they were part of. The ornate capital that Kenyon found is evidence of such an impressive building, and one archaeologist believes that it is proof of a royal structure.

Some 40 years after Kathleen Kenyon found the Jerusalem capital, archaeologist Dr. Eilat Mazar began digging in the City of David. Dr. Mazar’s grandfather, renowned archaeologist and Hebrew University professor Benjamin Mazar, taught her how to relate to the biblical text. He said: “Pore over it again and again, for it contains within it descriptions of genuine historical reality.”

Dr. Mazar lives by this advice and uses the Bible as her guide. 2 Samuel 5:17, in particular, caught her attention:

During the 1960s’ excavation of the City of David, Kenyon found a small section of a massive public structure dating to the 10th century b.c.e., the time of King David. At the time, Kenyon considered this to be a part of the casemate wall built by King Solomon. However, Dr. Mazar believed that it could be the same location as King David’s palace.

When Dr. Mazar shared this with her grandfather, he was enthusiastic about the suggestion. “Where, exactly,” he asked, “did Kenyon find the piles of ashlars together with the proto-Aeolic capital? Wasn’t it right next to the place you’re talking about?”

And indeed, it was. The proto-Aeolic capital was found at the foot of the southeastern edge of the structure. The capital clearly fell from this very impressive building. Dr. Mazar wrote: “This was just the kind of impressive remains that one would expect to come from a 10th-century b.c.e. king’s palace.”

Could this have been King David’s palace?

2 Samuel 5 records the construction of the palace. Soon after David became king of Israel, Hiram, the Phoenician king of Tyre, sent craftsmen and materials to help build his palace: “And Hiram king of Tyre sent messengers to David, and cedar-trees, and carpenters, and masons; and they built David a house” (verse 11).

As Dr. Mazar dug, she uncovered more and more of the ashlar building. It is known today as the “large stone structure.” Dr. Mazar estimates that only 20 percent of the palace has been excavated. But even with what little has been uncovered, is it “clearly the product of inspiration, imagination and considerable economic investment.”

The proto-Aeolic capital is a testament to the grandeur and expert craftsmanship that went into constructing this palace. Dr. Mazar wrote that this was the most beautiful and elegant proto-Aeolic capital ever found in Israel, surpassing examples found in Samaria and Megiddo. She added: “Imagine the column that supported this capital. Then imagine the building in which such columns stood.”

Although Kathleen Kenyon’s capital is the best example of its kind, it is certainly not the only one. More than 35 capitals have been found in Israel and Jordan, 24 of which are from the First Temple period. Most of them have been found in major ashlar constructions in cities like Megiddo, Hazor, Ramat Rachel and Samaria.

Ashlar buildings were made of massive square-cut stones. Amnon Ben-Tor, professor of archaeology at Hebrew University, wrote in his book The Archaeology of Ancient Israel that large ashlar structures are limited to the major centers and that this type of construction is “definitely the product of state or royal initiative.”

The Oxford History of the Biblical Word states that ashlar construction was more costly than other building materials and occur in formal buildings such as palaces and shrines, sites that served as regional royal cities. For example, Solomon’s temple was made using ashlar stones (1 Kings 7:10). Oxford History of the Biblical Word also says that the proto-Aeolic capital was a signature of this formal style of architecture:

The high quality and uniformity of these features of the monumental architecture of the 10th century represent a building style that may have been designed in to the United Monarchy by an unknown royal architect. … Some architectural historians suggest an Israelite origin for these fine Iron Age construction techniques and embellishments ….

Most of these capitals have been found in secondary use, making it difficult to reconstruct the original position of the capital within the architectural design. But recently, one detailed proto-Aeolic capital was discovered in the Refaim Valley in situ.

In 2013, excavations at Ein Joweizeh uncovered a capital still connected to the original column. It has survived in its original setting because it is quite literally carved into bedrock several meters underground. It is part of the opening to a First Temple period water tunnel. The tunnel itself is an impressive find: At 52 feet, it is the longest tunnel of its kind in the area. The scope of the tunnel reflects an enormous investment, likely a state initiative.

In 2012, a capital fragment was uncovered by Dr. Mazar in the City of David. This piece demonstrated again that the special artistry in the royal city of Jerusalem.

These capitals provide a vivid depiction of how ornate and intricate the Israelite palaces were. Some scholars have tried to dismiss kings David and Solomon as being nothing more than petty tribal chieftains, but these capitals speak to the majesty and grandeur of their kingdom.