Germany Wants to Be Israel’s Mediator

Germany’s foreign minister claims it needs to protect Israel from its own decisions.
By Josué Michels • June 14, 2020 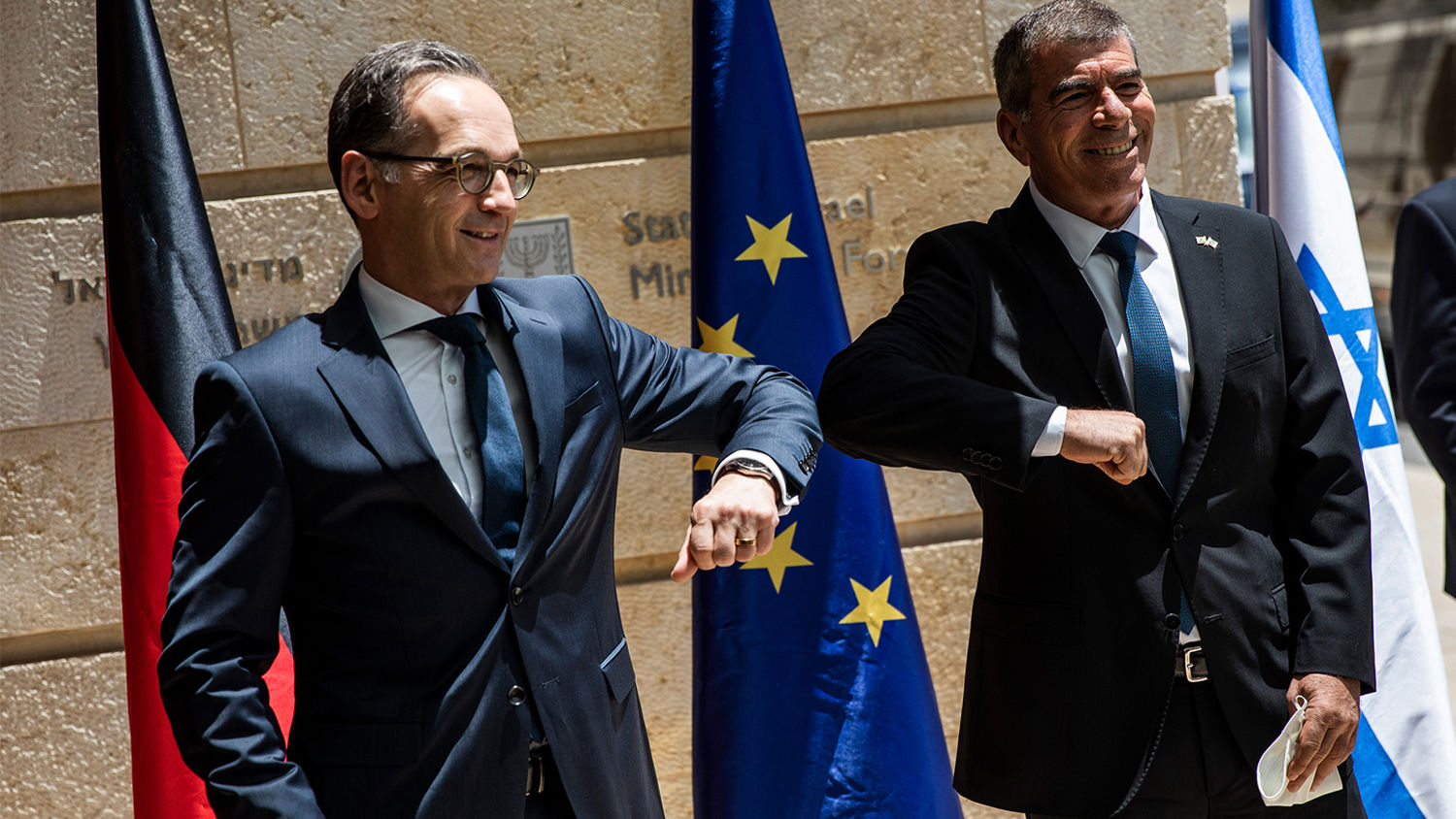 Israel seeks to implement a peace plan with the Palestinian Authority, with the help of the United States. Germany, considered Israel’s second-most important international ally, doesn’t agree with Israel’s plan to annex 30 percent of the West Bank. So German Foreign Minister Heiko Mass traveled to Israel as an unwanted “mediator,” as Germany’s Zeit Online noted in “A Particularly Stressed Relationship.”

On June 10, Maas said that Israel’s annexation of the West Bank would be regarded as a violation of international law.

The Palestinian Authority has not agreed to what U.S. President Donald Trump called the “deal of the century.” In a joint press conference with Maas, Israeli Foreign Minister Gabi Ashkenazi said, “We expect the international community to make clear to the Palestinians that their refusal to participate will not serve Palestinian interests.”

Mass pleaded for “diplomacy and not for exchanging threats,” concluding “that compatibility on a solution seems difficult.”

“During the meeting,” Zeit Online wrote, “the long-standing supporter of the two-state solution [Ashkenazi] is said to have emphasized Germany’s weight several times. You know how important it is to listen to one of your closest friends and to rethink your point of view, Ashkenazi said. ‘This is what we do.’”

Israel, understandably, wants to declare sovereignty over the West Bank. Since Israel’s founding in 1948, Arab nations have sought to destroy the tiny nation. In 1948, 1956, 1967, 1973, 1982 and 2006, various Arab forces have united in their struggle against Israel. The main instigators in the conflicts were Egypt, Jordan, Iraq, Syria and Lebanon.

Prior to the 1967 Six-Day War, Arab states led Palestinian guerrilla groups to attack Israel. As its neighbors mobilized for war, Israel led a preemptive strike against Egypt and Syria and launched a ground offensive in the Sinai Peninsula, the Golan Heights, the Gaza Strip and the West Bank.

Israel won the war and, among other things, occupied the acquired territory to protect itself from future conflicts. But the international community has never accepted the land as belonging to Israel.

The conflict between Israel and its Arab neighbors has remained unresolved. Knowing Israel’s military supremacy, some neighboring Arab nations have refrained from military attacks, opting instead to sponsor terrorism. During the so-called peace process, Israel has repeatedly given land to gain peace. Yet the conflict continues.

“Israel has occupied Palestinian territory since 1967, thereby breaking international law,” Zeit Online wrote. “The planned annexation, which is part of U.S. President Donald Trump’s Middle East plan, is causing widespread opposition from the EU and neighboring Arab countries. For the special relationship between Israel and Germany, it means a new stress test: On July 1, the Israeli government wants to take the first steps to expand Israel.”

Germany, one of Israel’s supposedly “closest allies,” fundamentally disagrees with its current policies. Maas tweeted: “We also talked about the Middle East peace process: I told my Israeli colleague our honest, serious concerns about the consequences of annexation. We stand with our EU partners for a negotiated, mutually acceptable two-state solution.”

But negotiating a “mutually acceptable two-state solution” has been impossible.

Due to the horrors Germany committed against the Jewish people in World War ii, the nation has given itself a “special” responsibility to secure Israel’s security in the Middle East. This is why Maas decided that his first trip abroad after the coronavirus pandemic would be to the Middle East.

Maas knows how much the Israeli government values Germany’s partnership. He also knows that one of Prime Minister Benjamin Netanyahu’s main goals is to secure the territories in the West Bank while he has America’s blessing.

But Germany believes Israel is making a terrible decision. Zeit Online explained why: “Israel’s security is Germany’s raison d’état; this premise is as firm as the wall between Israel and the Palestinian territories. With the planned annexation, more and more Israelis fear that their security is not only threatened by external dangers, but now also by the policies of their own government. The peace agreements with Egypt and Jordan are in danger.”

The international community has long pressured Israel to give up its claims to the territory gained in 1967. Even the deal negotiated by the Trump administration is based on this.

Watch Jerusalem editor in chief Gerald Flurry warned of the dangers of the peace deal in “Will the Trump Peace Plan Bring Peace to Israel?” He wrote: “If implemented, this plan puts a Palestinian state on the doorstep of Jerusalem and surrounding almost every Jewish settlement in the West Bank. It doesn’t create two states side by side with one continuous border: It is a series of roads, tunnels and overpasses connecting islands of Jewish communities in the West Bank, each surrounded by a historically hostile people.”

As Mr. Flurry explained in his article, the dilemma Israel is currently in is prophesied in the Bible.

Israel is currently putting all its hope in President Trump. But what will Israel do after Trump’s presidency ends or the cooperation fails for some other reason? The Bible prophesies that Israel will then turn to Germany as its last hope.

The book of Hosea was written as prophecy for the end time. The nation called Israel today is really biblical Judah. Hosea includes specific prophecies about Judah.

“When Ephraim saw his sickness, and Judah saw his wound, then went Ephraim to the Assyrian, and sent to king Jareb: yet could he not heal you, nor cure you of your wound” (Hosea 5:13).

Studying this verse in the original Hebrew reveals that both Ephraim (Britain) and Judah go to Assyria (the prophetic term for modern-day Germany—to prove this, request our free booklet Germany and the Holy Roman Empire).

Why go to Germany? And what is Judah’s “wound”? Strong’s Concordance defines that word, “in the sense of binding up: a bandage, i.e. remedy.”Gesenius’ Hebrew-ChaldeeLexicon defines it, “the pressing together, binding up of a wound; here used figuratively of a remedy applied to the wounds of the state.” In other words, the remedy is the wound!

This is a specific prophecy that Watch Jerusalem has drawn attention to for many years.

“Is the peace process with the Arabs the Israeli wound that God refers to in Hosea 5:13?” Mr. Flurry asks in Jerusalem in Prophecy. “I have been saying that the deeply flawed peace process was ‘Judah’s wound’ since it began in 1993. This delusional pursuit of peace through compromise has been an unparalleled disaster for Judah!”

Concerning Germany’s role in this prophecy, Mr. Flurry wrote in his article:

Already the European Union has been mentioned publicly as a protector to Israel as the U.S. grows weaker. Germany has grown more and more active in the region. It sent observers to look after the border with Egypt after Israel vacated the Gaza Strip; it sent peacekeepers to Lebanon after the Hezbollah-Israel war in the summer of 2006; for some years there has been talk of German troops helping to secure the Golan Heights should Israel give this strategic area back to Syria. Germany now has its navy deployed throughout the whole of the Mediterranean, one of the world’s most strategic waterways, from Gibraltar to Suez. Relations between German and Israeli politicians are the best they have been in decades.

For now, Germany is not the chief negotiator in the Middle East, but it is positioned to fill this role once the U.S. pulls out. We are getting very close to the fulfillment of this prophecy. What this means for the future of the whole world is explained in detail in Mr. Flurry’s booklet Jerusalem in Prophecy!