Is This the Biblical King Jehoash?

If so, what was he doing in the east Sinai outpost of Kuntillet Ajrud?
By Christopher Eames • June 24, 2020 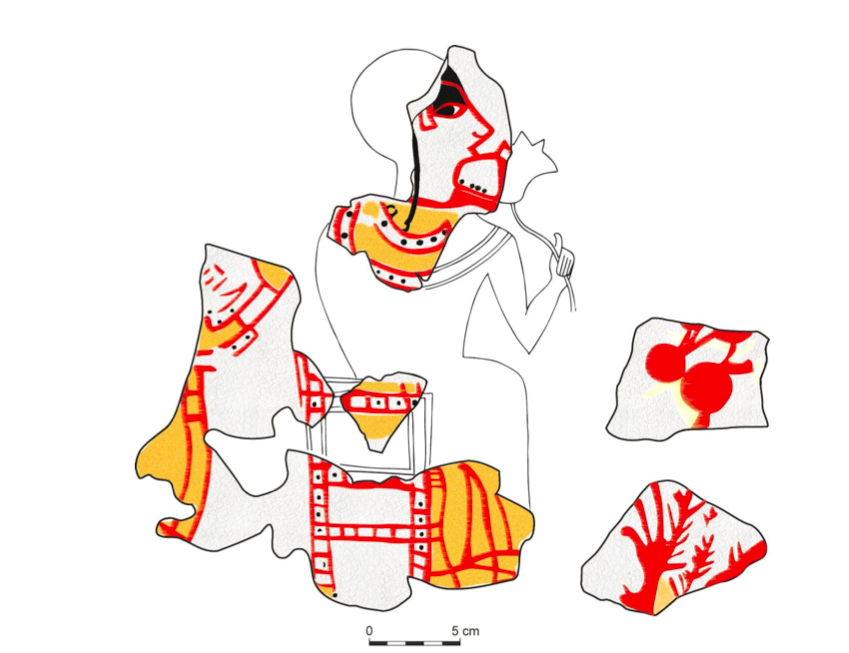 Jehoash was a biblical king of Israel who reigned from Samaria from the late ninth to early eighth centuries b.c.e. His existence has been proved by archaeology—the Tel al-Rimah Stele of Assyrian king Adad-Nirari iii refers to him as “Jehoash the Samarian.” As such, he numbers among 13 other kings of Israel and Judah who have been attested to in various inscriptions.

More rare, however, are images of Israelite rulers. While images of Egyptian, Assyrian, Babylonian and Persian rulers abound, there is only one generally accepted depiction of an Israelite king—that of King Jehu on the Black Obelisk. Besides this, a sculptured head discovered at Abel Beth-Maacah may also be that of King Jehu.

But another discovery, this time at Kuntillet Ajrud, has been posited as a rare representation of an Israelite king—a plaster painting depicting King Jehoash.

The steep hill of Kuntillet Ajrud is an unusual outpost situated in northeast Sinai near the Israeli border in a remote location. It is a special site in that it had only one period of use—dated by archaeologists around the late ninth to early eighth centuries b.c.e.—occupied for an estimated maximum 25 years. The name means “isolated hill of the water sources,” due to its nearby wells. As such, the small, simple two-building site would have functioned as a minor stopping point for sojourners into the wilderness.

The most notable discoveries at the site were numerous Hebrew ostraca (pottery inscriptions), including religious texts and artwork. Petrographic analyses show that the pots came from Jerusalem.

But the names and textual style found in the inscriptions were more Israelite in nature—from the northern kingdom rather than the southern kingdom of Judah. There was also reference to a “Yahweh of Samaria.” Even the iconography at the site was of a northern nature, rather than Judean. As such, the site excavator, Ze’ev Meshel (who began excavations on behalf of Tel Aviv University in 1975), believes the site operated under the control of the northern kingdom of Israel, rather than Judah. He also speculates that a depiction of a royal individual found at the site may be that of the Israelite king at the time: Jehoash.

But why would there be an Israelite outpost at such a distant area, between Egypt and Judah?

The northern kingdom of Israel was involved in a number of military campaigns during the reign of Jehoash. 2 Kings 13:25 describes his victorious campaigns in reclaiming northern territory from Syria. He also fought a bitter war against King Amaziah of Judah.

Amaziah had, with God’s help, defeated the Edomites—and inexplicably returned to offer the spoils to pagan Edomite gods. Following the “high” of his success, he proceeded to taunt the Israelite King Jehoash, daring him to meet “face-to-face.” This meeting happened—and all-out war ensued (2 Kings 14; 2 Chronicles 25). But it did not go the way Amaziah had planned.

In fact, so roundly did Jehoash beat Amaziah’s forces, that he marched all the way to Jerusalem, besieged the capital, and ransacked the temple. (Amaziah was later assassinated.) As such, Jehoash would have secured de facto control over Judah. This would help explain the appearance of this single-use outpost with signs of Israelite domination on the southern border of Judah—dating to precisely this time period. Dr. Meshel believes that this small outpost had some kind of ritual religious function, and based on the pottery of Jerusalemite origin, that it was kept stocked from Jerusalem at the behest of Jehoash—in connection with Jehoash’s plundering and domination of the city, as per 2 Kings 14.

Face of a King?

Among the circa 800 b.c.e. inscriptions and drawings found at Kuntillet Ajrud was a painted plaster portrait, generalized as depicting a seated “near-eastern king”—but more specifically, perhaps that of Jehoash. This identification would make sense based on the tight dating of the site and fitting with the geopolitical situation of the period.

The royal figure is depicted in typical kingly style with a lotus flower. This is a royal motif of Egyptian origin, found in near-eastern artwork (such as this example of a statue of an Ammonite king, holding a lotus flower, likewise from circa eighth century b.c.e.).

The Bible makes clear that Jehoash’s reign was one of paganism. His success against Judah was a strong judgment against Amaziah’s shocking about-face to paganism. And the remains (and especially artwork) from Kuntillet Ajrud show a quasi-Jewish, yet deeply pagan, set of religious beliefs. Depictions include obscene nude images of deities featuring a “wife”-goddess, Asherah. The Bible describes Asherah (during the reign of Asa, some 100 years prior) in 2 Chronicles 15:16 (New King James Version):

Also he removed Maachah, the mother of Asa the king, from being queen mother, because she had made an obscene image of Asherah; and Asa cut down her obscene image, then crushed and burned it by the Brook Kidron.

The fact that a “Yahweh of Samaria” and “Yahweh of Teman” (Edom) are both mentioned in inscriptions at the site may further indicate sympathies between Israel and Edom, both of which had fought against Judah.

The discoveries at Kuntillet Ajrud remarkably attest to the biblical account of the Israelite–Judahite–Edomite geopolitical situation around 800 b.c.e. We can only hazard an educated guess about the identity of this plaster figure until more evidence is uncovered. Unfortunately, Kuntillet Ajrud has fallen by the wayside as an archaeological site (especially given its location in the Sinai). Further, the artifacts were turned over to Egypt in 1993 as part of a deal between Cairo and Jerusalem surrounding the territory.

But in this unremarkable, small outpost location, we may have a remarkable depiction of a second Israelite king—first Jehu, and now his grandson, King Jehoash.