Why was an investigation about Russia probing someone critical of Iran and the Muslim Brotherhood?
By Samuel Livingston • June 26, 2020 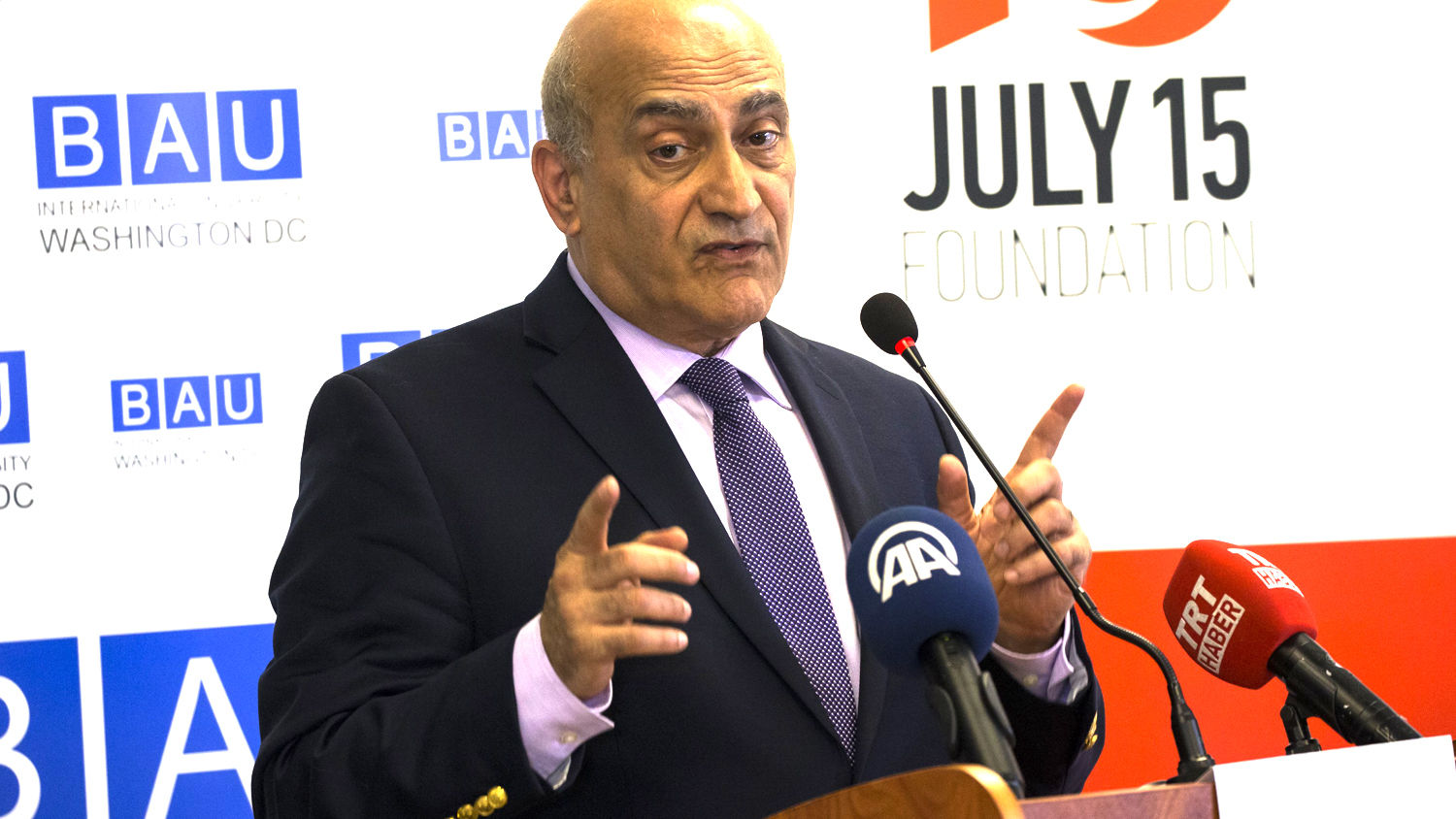 Former United States President Barack Obama spied on American citizens. That fact is beyond dispute. The big question is, why?

To leftists, the answer is “Russian collusion.” They claim that there was evidence the Trump campaign was working secretly with Russian agents. Therefore, the Obama administration had no choice but to investigate.

But in recent months, a different picture has emerged: an outgoing administration using fabricated evidence to spy on its successor.

Another piece of the puzzle is now known: Walid Phares. He was a Trump campaign adviser, and the Obama administration investigated him too. But Phares had nothing to do with Russia; he is an expert on Egypt.

Will leftists try to argue that the Obama administration was concerned about “Egyptian collusion”? Or was it abusing its power to spy on members of the Trump campaign for political reasons, thinking it could get away with it?

On June 3, Rosenstein was asked during a Senate Judiciary Committee hearing about his second scope memo. In that hearing, Rosenstein admitted that the memo was partially written by members of Mueller’s own team. They wrote their own rules. Rosenstein rubber-stamped their desire to dig into Phares as part of an investigation that, we were told, was about Russian meddling in the 2016 election. Investigating Russian collusion was their cover. Their real activity was investigating anyone in President Donald Trump’s orbit over anything—Russia, or no Russia.

After the memo became public in early May of this year, Adam Goldman and Michael Schmidt at the New York Times hinted at the identity of the redacted name: Walid Phares, a Trump campaign adviser with no ties to Russia. He writes that the Federal Bureau of Investigation and the Mueller special counsel investigated “whether a former Trump campaign adviser secretly worked for the Egyptian government to influence the incoming administration in the months before President Trump took office.”

Goldman’s sources, which in the past have included Obama-era holdovers who make strategic leaks to the press to spin the news, claim the investigation got going after a “tip” from Egypt. But that’s a very loose term. The “tip” could easily have been something like the infamously false Steele dossier. Some speculate it was made up by the Muslim Brotherhood, which had an advantageous relationship with the Obama administration, which Phares sharply opposed.

Phares would not be the first American citizen the Obama administration investigated based on made-up allegations.

Walid Phares is a Lebanese-American citizen who joined the Trump campaign in March 2016 to advise on foreign policy. Phares was not a fan of the Obama-orchestrated Iran deal; he appeared on Fox News several times to voice his strong opposition to the deal and to warn about Islamic terrorism. He also had contacts with Egyptian President Abdel Fattah al-Sisi, who was scorned by the Obama administration because of his opposition to the Muslim Brotherhood.

It’s safe to say the Obama administration was no fan of Walid Phares. According to Goldman and Schmidt’s anonymous sources, the FBI’s decision to investigate Phares in 2016 was “based on highly classified information.” The FBI never charged Phares, and Mueller’s team, after following up on Phares in 2017, never charged him. What exactly was the “highly classified information” used to justify the investigation? Notice this cleverly buried detail in Goldman and Schmidt’s article referring to the 2017 Mueller investigation (emphasis added):

The [Central Intelligence Agency] director at the time, Mike Pompeo, was briefed on the [Mueller investigation of Phares], suggesting that the agency might have obtained a tip from an Egyptian source that prompted the fbi inquiry [in 2016], people familiar with it said.

This is a well-traveled route. The “Black Ledger” from Ukraine that was used to take down Paul Manafort, as well as the “tip” from the Australian diplomat Alexander Downer about George Papadopoulos that supposedly triggered the FBI investigation into the Trump administration on July 31, 2016, likely both traveled the same path.

In an interview with John Solomon in June, Walid Phares said the allegations against him were false, such as the claim that he attended a secret meeting in Seychelles, a country he’s never traveled to. Phares said he believed the “push against the Trump campaign, and then the transition, and then the administration, was on behalf of those who wanted to defend the Iran deal, to protect the interests of the Iran deal.” The Steele dossier similarly contained details that were later proved fictitious.

Investigating Phares once he became an adviser to the Trump campaign gave Obama’s FBI leverage over an individual who could influence decisions on how to dismantle Obama’s Middle East policy of strengthening Iran. Phares worked throughout the Trump campaign but did not join the transition team. It’s worth noting that Michael Flynn and Walid Phares were well informed about Middle East policy and both staunch opponents to Obama’s Iran deal. Phares didn’t make it to the election and Flynn lasted just over one month into the administration before the Obama Department of Justice holdovers succeeded at taking him out.

Congressman Devin Nunes told John Solomon he believed Phares was “set up.” He said, “I can say with 100 percent certainty that Walid Phares was targeted for a political dirty trick just like we saw with so many other people in the Russia collusion hoax.”

Nunes has been repeatedly attacked by the media and Democrats, but over the last 42 months, he’s been the only politician proved right.

Consider how much information continues to be revealed about this unlawful investigation. Walid Phares was targeted in 2016, and the public did not learn about the unlawful attack on him until May 2020. It’s likely the New York Times received the leak about Phares in order to preempt any statements or actions from the ongoing criminal investigation by John Durham.

In May 2018, Watch Jerusalem editor in chief Gerald Flurry wrote, “Something diabolical was going on until Mr. Trump was elected—and it is still going on behind the scenes during his presidency.”

“The more stories that come out, the clearer this ugly reality becomes,” he continued. The revelation about the Obama administration’s illegal investigation against Walid Phares, an American citizen working for an opposing political campaign, is another shocking though small part of that “ugly reality.”

In November 2018, Mr. Flurry wrote, “Since Donald Trump became president, the depth of lawlessness and corruption permeating America’s leadership, aided by America’s media, is being uncovered.” Over the past three years, Mr. Flurry has written about the biblical importance of the battle between President Trump and Barack Obama. To grasp the significance of these many details, it’s imperative that you understand the spiritual aspect of this battle.

Mr. Flurry wrote that God is saving America temporarily using President Trump (2 Kings 14:26-27), and one reason God is doing that is “to expose this evil.” Bible prophecy reveals that President Trump is leading a temporary restoration of America and that includes restoring the rule of law, which came under attack by the Obama administration. Had Mr. Trump not been elected, none of this corruption would have been exposed.

To learn more about the motives behind the Obama administration’s attack on President Trump, read Mr. Flurry’s article “Saving America From the Radical Left—Temporarily.”