Biblical-Era Seal and Bulla Discovered in City of David

New evidence of Persian-period administration in the Jerusalem of Ezra and Nehemiah
By Christopher Eames • June 29, 2020 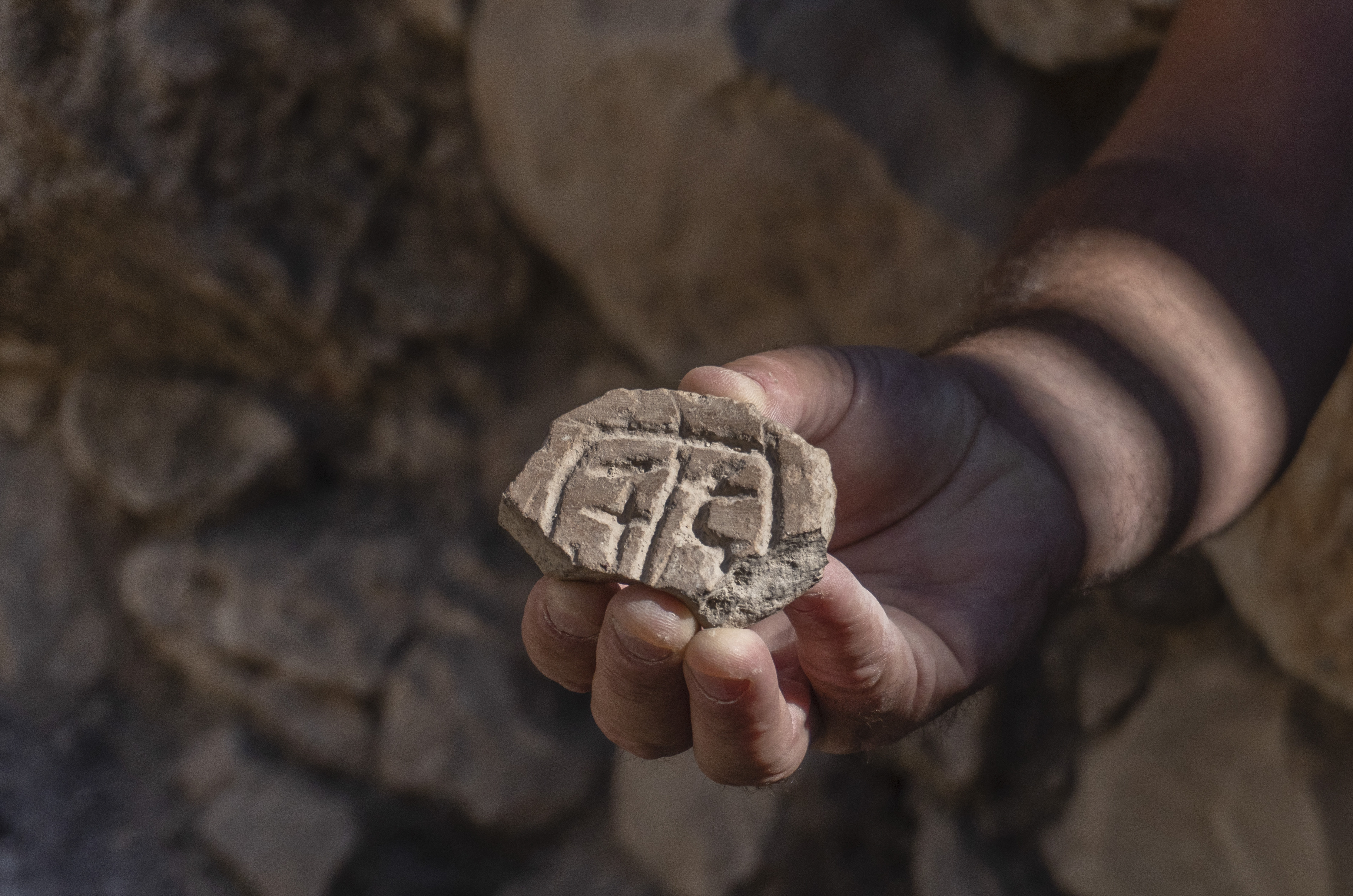 A new discovery from the Givati Parking Lot excavations was released to the press this morning: the discovery of a seal stamp and bulla. The items, and where they were discovered, help illustrate the standing and administration of Jerusalem during the Persian period.

The two small finds were discovered in a building that had evidently been reused during the Persian period, following the Babylonian destruction of Jerusalem circa 586 b.c.e. The stamp and bulla found within attest not only to occupation in this City of David structure, but in particular to administration activities as well.

The seal stamp (pictured above) is a larger, more primitive item, which originally had a handle—somewhat akin to our modern large office stamps. The face of the stamp is broken, but it has two images engraved on it—probably representing two characters in a pseudo-epigraphic style (images designed to resemble letters). This large seal was probably used to stamp jars or other large items.

The bulla (a clay seal impressed with an official seal stamp) is more intricate and had been impressed twice by the same seal. This bulla depicts a man seated on some kind of throne or administrative chair—perhaps a king or governor—together with pillars (perhaps the rod symbols of the Babylonian god Nabu or Marduk). The bulla parallels others of similar style found in the City of David, dating to the sixth to fifth centuries b.c.e.

Jerusalem during the Persian period is described in the biblical accounts of Ezra and Nehemiah, as well as the prophets Haggai, Zechariah and Malachi. And these discoveries help illustrate a number of biblical passages.

The books of Ezra and Nehemiah explain Jerusalem’s status as a minor, much-diminished, dilapidated city during the early Persian period—as attested to by the poor archaeological record. The books describe a divided administration even within Jerusalem itself. Nehemiah 3:9 and 12 show that Jerusalem had been split into two parts, with one “ruler” for each “half.”

Nehemiah was later established as a “Tirshatha” (or governor; Nehemiah 8:9); he apparently used a significant administrative building to host rulers from surrounding regions (Nehemiah 5:17). Verse 15 of the same chapter contrasts his administration to Jerusalem’s more heavy-handed “former governors.” And the Bible even specifically mentions the use of seals, or signets, during this period (Haggai 2:23).

Alongside the stamp and bulla, a large quantity of fish bones were discovered in the Persian building. Uniquely during this period, we see an emphasis on the fish market, with a particular condemnation of the sale of fish on the Sabbath (Nehemiah 13:16). Jerusalem’s “fish gate” is also mentioned in the book of Nehemiah (Nehemiah 3:3; 12:39).

To date, few remains have been discovered from Persian period Jerusalem, indicating the minor importance of the city during this time frame. With one exception: In 2007, on the opposite side of the City of David, Dr. Eilat Mazar discovered 13 meters of an early Persian period wall and a tower—a rebuilding effort of the original city fortification line. Based on the location, dating and “hasty” construction style, this length of wall can best be identified with a stretch of Nehemiah’s wall described in Nehemiah 3:16. For more detail on this discovery, take read our article here.

According to Prof. Yuval Gadot and Dr. Yiftach Shalev:

The finding of the stamp and seal impression in the City of David indicates that despite the city’s dire situation after the destruction, efforts were made to restore the administrative authorities to normal, and its residents continued to partly use the structures that were destroyed.

That’s the gist of the biblical account of the Persian period—the reuse and repair of Jerusalem’s existing structures and reestablishment of city administration.

Professor Gadot and Dr. Shalev’s excavations have unveiled a number of fascinating finds recently, especially last year’s discovery of the Nathan-melech bulla (2 Kings 23:11). We look forward to many more!

Get Our Magazine Request your free subscription
to Watch Jerusalem magazine
Subscribe
Related
The Holy Roman Empire in Prophecy
The Holy Roman Empire has made pivotal and defining contributions to Western civilization-but its many reincarnations have also come with painful and catastrophic consequences. European leaders aim to unite the fractured continent of Europe by reviving the legacy of this extraordinary church-state combine. One of the great lessons of this empire is that it always comes back. There is always another resurrection. The Holy Roman Empire is not just a relic of history. It is about to play a central role in world events. Coming to understand about the nature and character of this powerful institution tells you as much about the future as it does about the past.
Request Now