Is there a distinction between anti-Zionism and anti-Semitism?
By Rufaro Manyepa • July 8 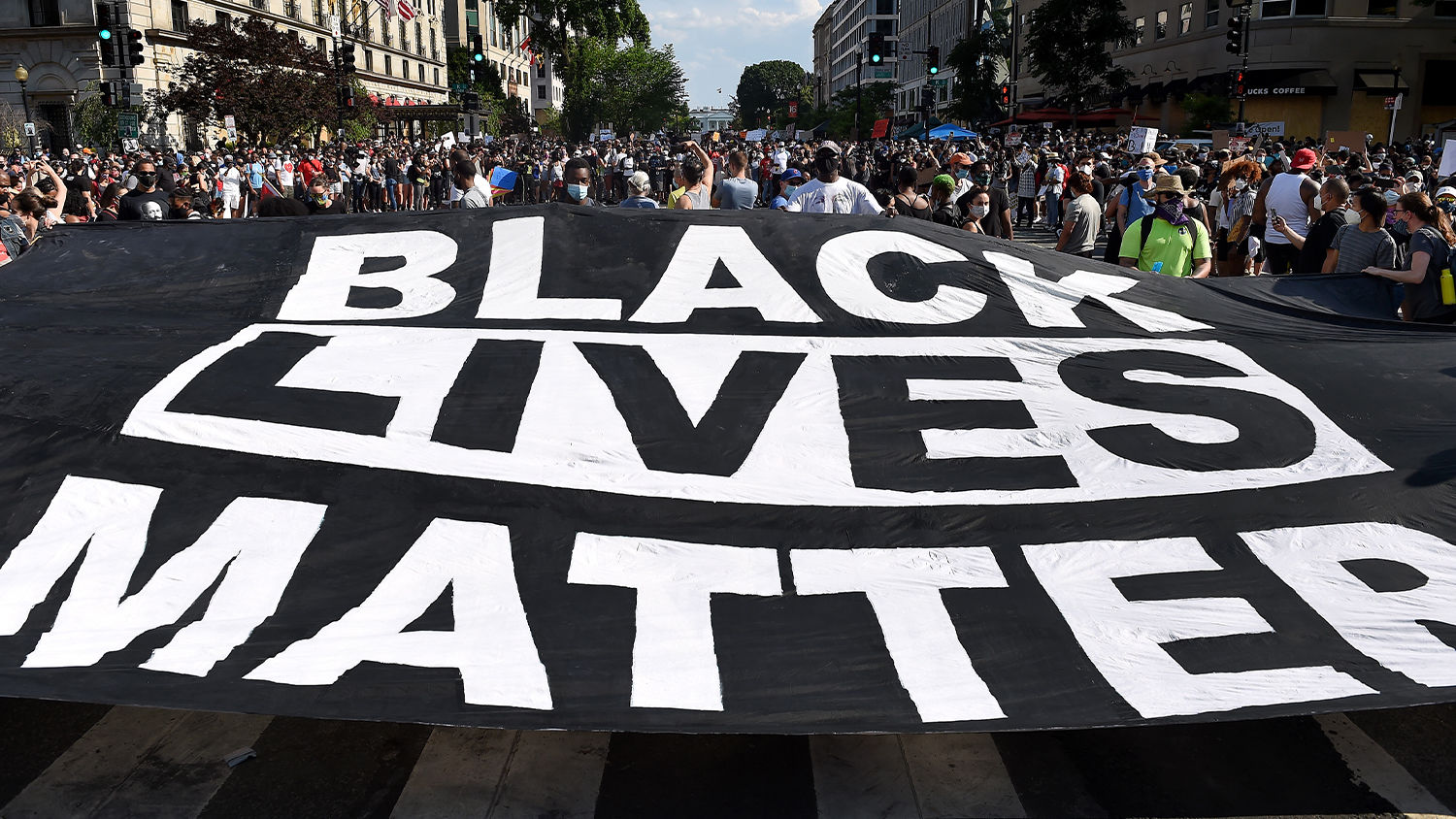 Demonstrators deploy a ” Black Lives Matter” banner near the White House during a demonstration against racism and police brutality, in Washington, DC on June 6, 2020.
OLIVIER DOULIERY/AFP VIA GETTY IMAGES

Jewish groups have accused Black Lives Matter (BLM) of the “spread of hatred” after a series of tweets were posted to its official Twitter account regarding the Israel-Palestine conflict.

As Israel moves forward with the annexation of the West Bank, and mainstream British politics is gagged of the right to critique Zionism, and Israel’s settler colonial pursuits, we loudly and clearly stand beside our Palestinian comrades.

In the tweets, posted on June 28, BLM takes a firm anti-Zionist stance. It quotes the “fast-growing [United States] organization Jewish Voice for Peace on Zionism” in calling the State of Israel a “colonial” nation whose “far-right government” works to advance “Israel’s settler colonial pursuits.”

BLM has long exhibited anti-Israel tendencies. It is part of the coalition group Movement for Black Lives, which claims that the State of Israel is an apartheid state that perpetrates “genocide” against the Palestinian people.

Israel is the only foreign country it criticizes.

BLM wrote, “As Israel moves forward with the annexation of the West Bank, and mainstream British politics is gagged of the right to critique Zionism, and Israel’s settler-colonial pursuits, we loudly and clearly stand beside our Palestinian comrades. Free Palestine.”

Ostensibly aware that its anti-Zionist stance would bring accusations of anti-Semitism, Black Lives Matter then cited over 40 Jewish organizations that oppose conflating “anti-Jewish racism with opposition to Israel’s policies and system of occupation and apartheid.” The Jewish Voice for Peace, for example, stated, “At times like this, it is more important than ever to distinguish between the hostility to or prejudice against Jews on the one hand and legitimate critiques of Israeli policies and system of injustice on the other.”

Simply put, BLM, and the 40 Jewish groups it cites, is saying anti-Zionism does not mean anti-Semitism.

Yet a majority of Jewish groups disagree. The 40 Jewish groups cited are not a majority, but a mere 1 percent of the over 4,000 pro-Jewish organizations and bodies. And the vast majority have condemned BLM and their stance.

It is best summed up by the charity Campaign Against Anti-Semitism: “Zionism is the movement for the self-determination of Jews. The right to the ‘self-determination of peoples’ is universal and enshrined in Article 1 of the [United Nations] Charter. So-called anti-Zionism exclusively denies Jews that universal right, and is therefore anti-Semitic.”

Marie van der Zyl, president of the Board of Deputies of British Jews, agrees, saying, “It is beyond disappointing that the Black Lives Matter UK, supposedly an anti-racist organization, has leaned into the anti-Semitic trope that British politics is ‘gagged’ in terms of debating Israel.”

There is a small, but vocal minority of Jews that argues that anti-Semitism and anti-Zionism are mutually exclusive. But they are just that—a small minority. According to a Pew survey of American Jews, 81 percent of Jewish millennials (18-to-29-year-olds) consider caring about Israel as “essential” or “important” to being Jewish.

Anti-Zionism not only attacks the policies of Israel but challenges its existence as the home of Jews and is therefore inherently anti-Semitic. The Jewish Voice for Peace, readily cited and quoted by BLM, is a prime example. It is firmly anti-Zionist, believing that it is immune to accusations of anti-Semitism.

Brown University Prof. Benjamin Gladstone explained the fallaciousness of this type of logic in 2017 (emphasis added):

[T]he primary function of anti-Zionist Jews in progressive spaces is not to stand up for Jews or Jewish rights, but to bolster the claim that anti-Zionism does not significantly overlap with anti-Semitism. Thus, the ironically named “Jewish Voice for Peace” has partnered with an array of anti-Semites posturing as mere anti-Zionists, from Miko Peled, who dubbed Jews “sleazy thieves,” to Alison Weir of “If Americans Knew,” who complained about there being too many Jews on the Supreme Court, championed the medieval blood libel, and repeatedly partnered with white supremacists and Holocaust deniers like Southern Poverty Law Center-designated Clayton Douglas. (jvp briefly distanced itself from Weir, only to reinvite her to events soon after.)

By offering themselves as Jewish tokens to the powerful, worldwide anti-Zionist movement, anti-Zionist Jews promote a dangerous distinction among progressives between good Jews (American, anti-Zionist, and nearly 100 percent Ashkenazi—like the tokens) and bad Jews (Israeli, Zionist, less economically privileged, and more diverse—like the majority of Israeli Jews who are Mizrahi, Sephardi, Ethiopian, or Indian). The anti-Zionist argument is that if any Jews, even in small numbers, are anti-Zionist, anti-Zionism by definition cannot be at all related to anti-Semitism and the two rarely, if ever, meet. Israelis and the Zionist majority of American Jews, therefore, are fair targets for draconian discrimination and must forfeit their right to speak out against anti-Zionism, even as it serves as a frequent cover for anti-Semitism today.

Despite such sensible opposition to anti-Zionism, it persists—even in groups like Black Lives Matter, which supposedly have an anti-racism agenda.

Such a position has led BLM and its affiliates to refer to Israel’s role in the conflict with Palestine as genocidal—a term meaning “intent to destroy in whole or in part, a national ethnic, racial or religious group.” Historical examples of genocide include the Holocaust, which saw 6 million Jews killed in Europe, and the Rwandan genocide, in which 800,000 Tutsi were killed.

Deaths in the Israeli-Palestinian conflict, about 7,000 people killed since 2000 (according to the UN), are far below what is necessary to constitute genocide. And these casualties have been on both sides, and mostly militant rather than civilian for the Palestinian side. Most of Israel’s deaths have been civilians.

In fact, according to the Palestinian Bureau of Statistics, the number of Palestinians has risen from 1.4 million in 1948, when the State of Israel was founded, to 11 million in 2010 to about 12.3 million today, though only about half of these live in Israel.

“Falsely accusing the state founded by Jews in the ashes of their own genocide of committing genocide is, simply put, a blood libel on a national scale,” wrote Yair Rosenberg for Tablet. It is an incendiary allegation, and such anti-Israel sentiment is only growing.

The fact that it is being propagated by purportedly anti-racist organizations such as BLM seems contradictory. Why is anti-Zionism growing despite its obvious root in anti-Semitism? Why are nations determined to oppose and demonize the State of Israel? Why are anti-racism groups leading the charge against Jews?

Bible prophecy provides a clear picture of the source of all this hatred.

In this end time, the prophetic name of Israel refers to America, Britain (and the British peoples) and the Jewish nation (or biblical Judah). (For detailed proof, please request The United States and Britain in Prophecy, by Herbert W. Armstrong.)

The identity of these nations helps us understand Bible prophecy. Notice 2 Kings 14:26-27: “For the Lord saw the affliction of Israel, that it was very bitter: for there was not any shut up, nor any left, nor any helper for Israel. And the Lord said not that he would blot out the name of Israel from under heaven: but he saved them by the hand of Jeroboam the son of Joash.”

In “America Has Been ‘Fundamentally Transformed,’” Watch Jerusalem editor in chief Gerald Flurry wrote, “[The] goal is to ‘blot out the name of Israel from under heaven’. That means from all over the entire Earth! … These verses in 2 Kings 14 show that anciently, the enemies of Israel wanted to destroy Israel …. It is important to understand the prophetic principle of duality. History is repeating itself today.”

The Bible reveals that there is a devil on this Earth and he is full of wrath. “Satan hates everything God is about,” Mr. Flurry wrote. “He harbors terrible hatred for Israel. … And he uses … men to undermine and destroy Israel—even to blot it out entirely if he can!”

Watch Jerusalem managing editor Brad Macdonald wrote, “If you understand this deep hatred for and attempt to destroy ‘Israel’ and where it comes from, the chaotic world around you suddenly makes a lot of sense!” To gain a better understanding of what is happening in this world, please read Mr. Macdonald’s article, “The Prophecy That Explains the World.”