‘Northern Africa is turning into a battleground with enormously important prophetic implications.’
By Josué Michels • July 19, 2020 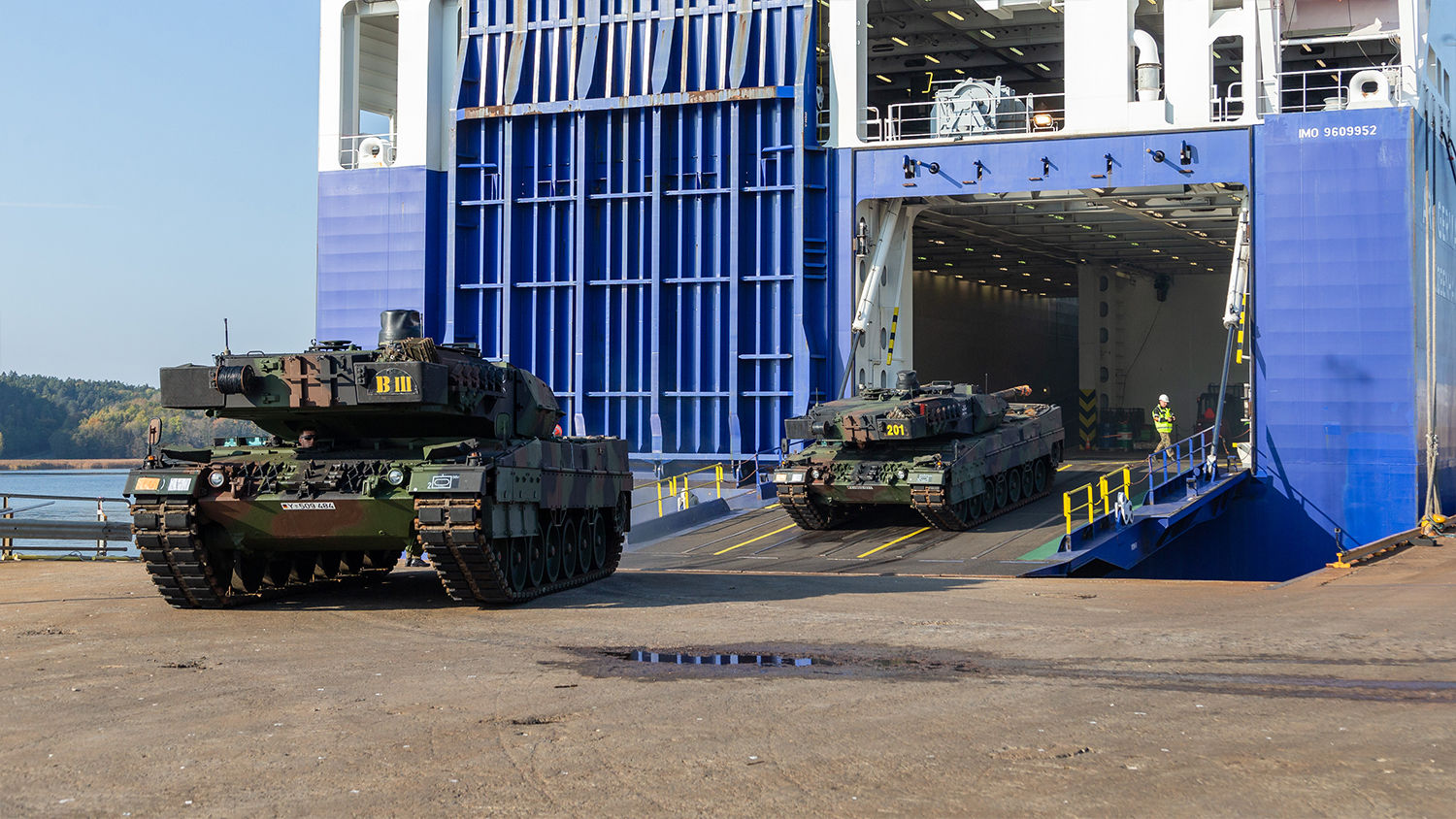 Leopard 2 tanks are driven to the harbor of Fredrikstad after being shipped for the large-scale nato exercises “Trident Juncture” in Norway.
MOHSSEN ASSANIMOGHADDAM/PICTURE ALLIANCE VIA GETTY IMAGES

In the first four months of 2020, German weapons exports rose by 40 percent compared to the same period last year. Its weapons exports are on track to increase significantly this year. While a large part of the weapons going to fellow members of the North Atlantic Treaty Organization, many also go to so-called third countries. The exact amount is, as of 2020, kept secret.

This is the first full year that German weapons exports are unable to be tracked.

German weapons exports also saw a significant increase in 2019. Weapons exports increased about 40 percent over 2018, but remained below 2017 levels. Weapons of war exports include submarines, tanks, combat aircraft and guns. When other armaments, such as armored ambulances and military trucks, are included, export permits issued by the German government in 2019 rose to a record level of more than $8 billion.

In 2020, the government classified information that reveals exported goods to third countries to prevent the “re-identification of affected companies” and to protect “business and trade secrets.” However, it is evident that exports to third countries also increased.

The export of nearly 40 percent more weapons of war “is completely irresponsible” in “a world in which conflicts are increasing every day,” Dagdelen said. “Especially with the export of weapons of war to Egypt and Turkey, the federal government is feeding the conflicts in and around the Mediterranean and is even blatantly violating its own lax arms export guidelines” (Trumpet translation throughout).

According to the Stockholm International Peace Research Institute, Germany was among the top four arms exporters in the world between 2015 and 2019. Its 2014 arms exports were 17 percent higher than 2010.

In 2020, we could see new records set. Germany’s new secrecy, however, makes it harder to follow who it is arming.

The Economics Ministry website states that arms exports are not resources for economic policies, but help build strategic partnerships and alliances. This means it is crucial to understand how Germany is using its arms exports.

A classified document by the Ministry of Economic Affairs, which became available to the German Press Agency in June, shows that Turkey received more than a third of Germany’s total weapons exports last year. Previous reports about German arms exports reveal that courtiers in Northern Africa and the Middle East are among its main recipients outside nato.

From 2014 to 2017, approved arms exports to countries outside the EU and nato increased by 47 percent compared to the period from 2010 to 2013; the largest recipient nations were Algeria and Egypt. Germany wants close cooperation with these two countries because of their strategic location in Africa. Algeria’s long coastline makes it a crucial partner in monitoring the Mediterranean Sea. Egypt controls the Red Sea and the Suez Canal, the gateway for European imports from and exports to Africa and the Middle East.

Arm sales to Turkey are also significant. Turkey opposes Iran’s influence in Syria. Without Turkey, the area could soon fall into the hands of radical Islamists. Another major recipient of German arms exports has been Saudi Arabia, also a strong opponent of Iran.

“Northern Africa is turning into a battleground with enormously important prophetic implications,” wrote Watch Jerusalem editor in chief Gerald Flurry in 2013. He discussed the spread of Iran-backed terror groups, but warned that “Iran isn’t the only one interested in Africa. Germany is making strong inroads as well. Both of these powers are racing to get as much control of North Africa as they can. They will inevitably clash with each other.”

This clash has been prophesied. The Bible also reveals exactly who will ally with Germany in the end. In “A Mysterious Prophecy,” Mr. Flurry explained that Psalm 83 speaks of an unprecedented alliance prophesied to form in our day. This prophecy says that Turkey (Edom), Saudi Arabia (Ishmaelites), Syria (Hagarenes) and Germany (Assur) will make up this alliance.

Daniel 11 prophesies that Germany’s military preparations will lead to war: “And at the time of the end shall the king of the south push at him: and the king of the north shall come against him like a whirlwind, with chariots, and with horsemen, and with many ships; and he shall enter into the countries, and shall overflow and pass over. He shall enter also into the glorious land, and many countries shall be overthrown: but these shall escape out of his hand, even Edom, and Moab, and the chief of the children of Ammon” (verses 40-41).

The “king of the north” in this prophecy refers to a German-led European empire; “the king of the south” refers to radical Islam, led by Iran. Turkey, or Edom, is prophesied to escape this attack because, at the time, it will be in an alliance with Germany.

German weapons exports play a crucial role in ensuring this alliance is formed.

You can learn more about these developments by requesting a free copy of The King of the South by Gerald Flurry.